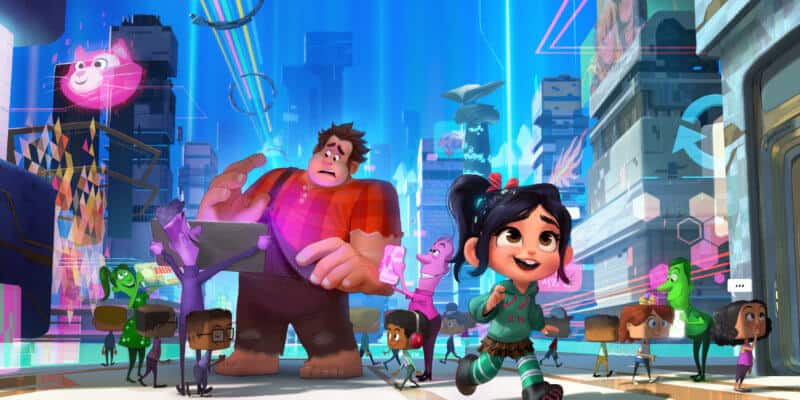 “Ralph Breaks the Internet” is Walt Disney Animation Studios follow-up to 2012’s “Wreck-It Ralph.” In “Ralph Breaks the Internet,” Ralph (John C. Reilly) and his best friend Vanellope von Schweetz (Sarah Silverman) reunite to explore the wild and untamed world of the internet. In what is sure to be an instant classic, this duo of misfits set out on a quest that will have you laughing throughout, plus provide a plethora of quotable moments to share among friends.

Hitting theatres the day before Thanksgiving, November 21, 2018, “Ralph Breaks the Internet” is a fun holiday experience for families and groups of all ages. The internet is the perfect subject matter appealing to younger viewers who only know life with the internet. Older viewers will no doubt relate to Ralph and Vanellope’s struggles adapting to this new world that is so different than the retro ’80s video game world they came from in the first movie.

“Ralph Breaks the Internet” elevates itself from every other successful comedy released in 2018 as it combines:

3) The most relatable and relevant subject matter in the world today – The Internet.

While immensely funny, the story doesn’t shy away from big topics and important messages, which was a key ingredient to the success of “Zootopia,” another collaboration of co-directors Rich Moore and Phil Johnston. While these messages are an important aspect of the movie, the message doesn’t hurt or diminish the comedy; rather, the message enhanced it and will create some of your most lasting memories.

Our “Ralph Breaks the Internet” press conference video is jam-packed with insights and perspectives on many of the messages in the film.

Specifically, the topics of personal insecurities, empowerment, and independence are illustrated by Ralph and Vanellope throughout the film. Surprisingly in our over-politicized world and the immediate aftermath of the 2018 midterm elections, I am impressed with the positive manner the topic of empowerment and independence is addressed so that conservatives and progressives can hopefully find common ground.

Additionally, fans and critics of Disney alike will be amused in the self-deprecating humor found in the movie. “Ralph Breaks the Internet” doesn’t shy away from making fun of the past works of Walt Disney Animation Studios and the already popular Disney Princess scene is one of the many instances of this.

Ultimately as a parent, I hope my daughter takes the movie’s many messages to heart. As it relates to messages, this is the highest praise I can give a movie.

On a more personal level, there was one particular scene that illustrates what it means to be a blogger, or for that matter anyone whose career is tied to creating an audience for their product or service via the internet. I believe this scene may withstand the test of time and become comparable to me with 1991’s “Beauty and the Beast,” where I learned what it means to provide outstanding service via the iconic “Be Our Guest” musical scene. This “Ralph Breaks the Internet” scene illustrates creating an online audience in a similarly clear and compelling way (without the music).

The set-up has Ralph and Vanellope visiting eBay shortly after entering the internet. Just prior to arriving at the website they meet J.P. Spamley, who as the name suggests, is a salesman versed in the tools of clickbait and spammy content. The visual representation of this surprisingly likable character is refreshing even if his tactics are not ones to mimic. His struggle to get noticed among the mega-websites like eBay is relatable to anyone tasked with creating an online audience.

Ultimately this animated comedy captures hearts and earns praise because it is a hilarious take on perhaps the most pervasive aspect of modern life – the Internet. It deserves the moniker instant classic because it elevates storytelling beyond Walt Disney Animations Studios already high standards. The powerful messages and abundance of quotable content will keep you entertained well beyond the end of the movie.

See “Ralph Breaks the Internet” in theaters on November 21, 2018. Once you see the movie be sure to leave us a comment with your thoughts.

Can’t get enough of “Ralph Breaks the Internet”? Take a look at these exclusive interviews:

Comments Off on REVIEW: “Ralph Breaks the Internet” an instant classic