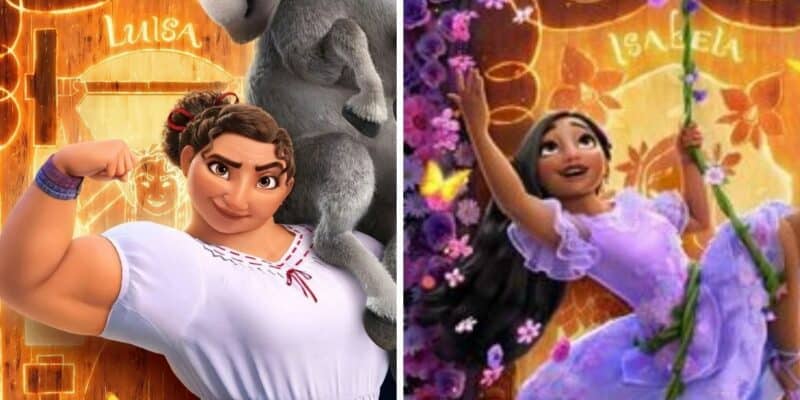 Disney’s Encanto (2021) has thrown Disney fans for a loop; the music is incredibly catchy (thanks to Lin-Manuel Miranda), it features wonderfully diverse looks and personalities and well, we don’t talk about Bruno. But what Disney didn’t anticipate was the love for an unusual character from the new Disney catalog addition.

Luisa’s journey from page to screen was one fraught with challenges over her appearance, as made clear by a character designer from Disney Animation. Top that with the fact that Luisa is outselling her more fragile and flowery sister, Isabela, and you’ve got the perfect storm of bucking tradition.

Luisa, a strong young woman with a tender spirit, is voiced by actress Jessica Darrow. As Mirabel Madrigal’s sister, Luisa has the unique gift of superhuman strength, lifting barrels and donkeys, and even the Casa Madrigal from time to time. But the immense strength and bold physical appearance had by Luisa didn’t come easily. Looking back at Disney’s animated catalog, it’s easy to see that heroic women are portrayed as thin, commercially beautiful, and fairly petite. But the animation team wanted to change that.

According to CBR.com, a character modeling supervisor at Disney came forward on social media, reflecting on how hard it was to be able to portray Luisa Madrigal in a less-than delicate light. The artist, Dylan Ekren, recently made their Twitter account private but had previously commented on the issue, saying how proud they were of Luisa’s super strength and final look.

An artist of the hit new animated film Encanto revealed that they had to fight Disney tooth and nail to portray Luisa Madrigal with her buff frame and iconic muscles.

Because Luisa’s gift is physical strength, it seems it would be a given for the 19-year-old woman’s design to reflect her tremendous brawn. However, Dylan Ekren, an illustrator and character modelling supervisor who worked on Encanto, said that it was incredibly difficult to convince the House of Mouse that Luisa should forgo the petite and slim build of many other Disney women to have a muscular frame instead.

“I think we all just wanted to do it in a way that worked well with the style and really made sense for the character and I’m really proud of the way that she turned out,” Ekren wrote on his Twitter account in July last year, which has since been made private. “The entire team was so awesome. I just pushed buttons in the right order.”

And we’re so glad they fought as hard as they did. The resulting Madrigal sister is amazing, and we hope to see more diverse characters like her in future films.

But that’s not where the story ends. Not only was Luisa a challenge to get approved, but she is so popular that she’s in higher demand than her petite, graceful sister, Isabela. The flowery Madrigal sister was thought by Disney to be a big selling point, with lacy-tiered costume dresses, hair products, and flowery accessories. But fans are looking for Luisa items on store shelves instead.

Twitter user Badly-Drawn Bee notes the outselling of Luisa merchandise and makes a poignant observation that yes, people do relate more “to women who are strong, honest, flawed, and interesting” than those who are just beautiful.

Apparently Luisa merch is outselling Isabella merch by a significant factor. Turns out children relate harder to women who are strong, honest, flawed and interesting than those who are just seen as beautiful. Go figure. #Encanto pic.twitter.com/FewHPqprDH

And she’s right. Luisa was given a minute amount of merchandise, including a solo figure with a barbell, a single t-shirt design, and inclusion among the family Madrigal figurine set. While we as Encanto fans are grateful for anything with Luisa on it, the amount of merchandise featuring Mirabel and her flowery sister Isabela is extreme and plastered on just about everything Encanto.

A mom was looking for Luisa merchandise to give her daughter the birthday she wanted, but instead is finding only Isabela merchandise. Isabela has, among other things, a dress, a barbie, a playset with an action figure, a LEGO door set, pajamas, multiple T-shirts, and more.

My daughter just asked for a Luisa themed bday party and literally everything encanto has Mirabels or Isabellas face on it. And I’m not in the financial situation to have everything custom made. Disney needs to step it up w/Luisa merch.

But fans continue to talk about Luisa. Luisa is vulnerable, open, anxious, and a caring family member. We as humans who have been through two years of strife and anxiety can easily relate to one strong woman cracking under the pressure to appear perfect and take care of everything.

So, who is your favorite Encanto character, and why is it Luisa? Leave us a comment below!