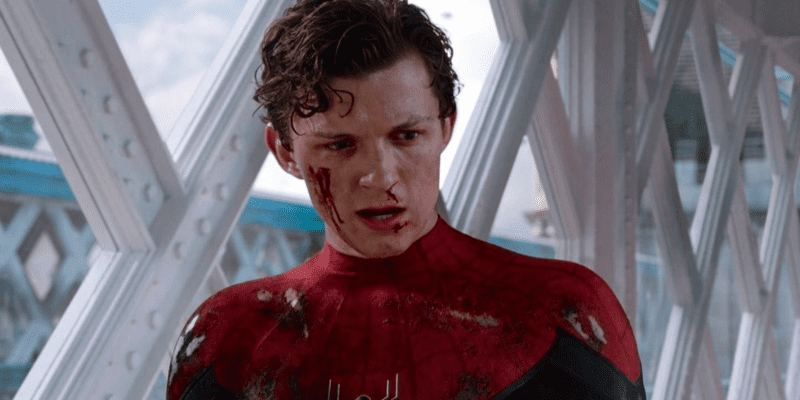 Spider-Man madness is at fever pitch now that Spider Monday — the official first day of ticket sales for Spider-Man: No Way Home (2021) — has come and gone. Insane demand for the hotly anticipated release from Sony and Marvel Studios led to fan frustration when online ticket sales theater sites crashed Monday morning. Now, it appears the pressure to bag a seat for Spidey has spilled over into real life. A video has surfaced that shows unruly Marvel fans throwing punches and grappling on the ground at a movie theater in Mexico as No Way Home ticket sales commenced.

A viral video posted to Facebook by Spanish-language newspaper Diario de Morelos shows the chaos that ensued at the entrance of a movie theater in Cuernavaca, Mexico, when Spider-Man: No Way Home tickets went on sale Monday morning. Some not-so-friendly neighborhood Spider-Man fans came to blows — throwing punches, kicks, and even wrestling — as the pressure to score the sought-after opening weekend tickets boiled over.

You can watch the full video of the altercation from Diario de Morelos here.

UPDATE: ITV El Salvador has made a high-resolution video available on their YouTube channel. Viewer discretion is advised:

Spider-Man: No Way Home tickets are a hot commodity as fans clamor to see the super-hyped movie before spoilers inevitably leak.

In this third entry of the MCU Homecoming trilogy, Peter Parker actor Tom Holland has promised an especially “violent” chapter for his Spider-Man. Holland recently revealed that No Way Home has a darker tone than his previous Spidey films, with fistfights more extreme than perhaps fans are used to, saying:

“There are some fight scenes in this movie that are very violent. And it’s a fighting style different from what we’ve seen before. But really you will get to see Spider-Man using his fists in a ‘fight or flight’ situation.”

Holland’s Spider-Man will have to get his hands dirty as he takes on foes from across the Sony and Marvel Multiverse. With technologically updated versions of Electro (Jamie Foxx), Doctor Octopus (Alfred Molina), Green Goblin (Willem Dafoe), among the sinister baddies he’ll be taking on, the MCU Parker could probably use some backup. Fans are demanding that — in addition to Avenger teammate Doctor Strange (Benedict Cumberbatch) — the cavalry come in the form of Amazing Sider-Man series, and Spider-Man trilogy leads, Andrew Garfield and Tobey Maguire. Though, neither Garfield nor Maguire have confirmed involvement.

If fans are already brawling over tickets to the film — which premieres in theaters December 17, 2021 — imagine the riots if Tobey Maguire and Andrew Garfield don’t turn up in No Way Home!

Spider-Man: No Way Home from director Jon Watts will bring an end to the Homecoming trilogy, but there are reports that Sony is planning a new trilogy with Tom Holland’s Spider-Man — that could include Sony Spider-Verse characters like Miles Morales, Morbius, and Venom. Hopefully, the possible second trilogy will also include fan-favorite amazing friends Ned Leeds (Jacob Batalon) and MJ (Zendaya.)

Were you able to (safely) score tickets for Spider-Man: No Way Home? Let us know in the comments!