Doctor Strange vs. Spider-Man 'No Way Home' Fight Details Leaked - Inside the Magic 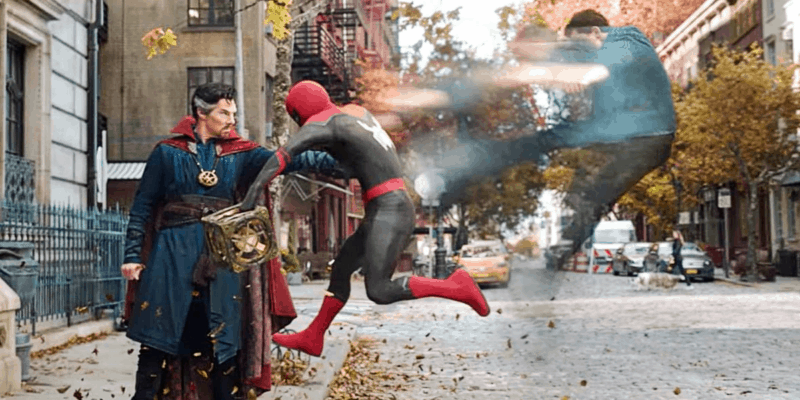 Fans of Marvel’s What If…? will recognize a key fight sequence in the upcoming Spider-Man: No Way Home. According to report, new details have emerged about the Doctor Strange vs. Spider-Man throw-down teased in the No Way Home trailer signaling a fun reference to the Marvel Zombies episode of What If…?.

What If…? Marvel Zombies Easter Egg

The Cloak of Levitation was the unexpected breakout star of the Marvel Zombies What If…? episode and — according to an unconfirmed rumor — the cloak will be similarly featured during a key fight sequence in Spider-Man: No Way Home.

Spider-Man Vs. Doctor Strange fight in Spider-Man: No Way Home

The Doctor Strange vs. Spider-Man fight teased in the No Way Home trailer will reportedly have a third combatant: the Cloak of Levitation. The Spider-Man 3 (2021) leak — as reported by Cosmic Circus (via Inverse) — says that Peter Parker (Tom Holland) will attempt to steal a magical artifact from the Sanctum Sanctorum of Doctor Strange. In the subsequent fight and chase sequence, the Cloak of Levitation is said to appear as a What If…? Easter egg, wrapping up Spidey to trap him, rather than protect him as it did in the Marvel Zombies What If…? episode.

What If…? and Phase 4 of the Marvel Cinematic Universe

In a recent interview with Entertainment Weekly, What If…? showrunner A.C. Bradley confirmed that The Watcher (Jeffrey Wright) will become more involved in the lives of his Multiverse heroes that he so dutifully observes. With a Multiverse-level crossover seemingly on the horizon for the final two episodes of What If…? Season 1, The Watcher is almost like an inter-dimensional Nick Fury.

Jeffrey Wright’s Watcher, largely relegated to narrating duties promises to finally interfere by assembling the likes of Captain Carter (Hayley Atwell), Party Thor (Chris Hemsworth), Doctor Strange Supreme (Benedict Cumberbatch), T’Challa Star-Lord (Chadwick Boseman), and even Killmonger (Michael B. Jordan) as the Guardians of the Multiverse. A super-team of this magnitude will be required to deal with the next villain — a composite Ultron/Vision commanding the full might of the Infinity Stones teased at the end of “What if… Thor Were an Only Child?”

A.C. Bradley commented on the cliffhanger endings What If…? has become known for, saying that the final two episodes will be somewhat different:

“[Episode 8] is its own episode, [but] it does flow in to 9. You can watch 8 as a stand-alone, but 9 is — for once we actually answer the end tag… What if the What If…? writers stopped trying to p*** off Twitter? It’s more just What if the Watcher Met His Heroes?”

First thought to be an animated anthology series of stand-alone stories within alternate versions of the Marvel Cinematic Universe, it now seems that What If…? will be informing the MCU rather than just taking inspiration from it.

The final two episodes of Marvel’s What If…? will premiere on Disney+ on 9/29 and 10/6 respectively. Episode 9’s title has yet to be revealed, but episode 8 has the ominous title of “What If…Ultron Won?”

Spider-Man: No Way Home will premiere in theaters exclusively on December 17, 2021. Spider-Man (Tom Holland) will struggle with a pre- Multiverse of Madness (2022) Doctor Strange to hold the Multiverse in check, while being accosted by Sony Spider-Man villains from Sam Rami’s Tobey Maguire trilogy, and Sam Webb’s Andrew Garfield films. Alfred Molina from Spider-Man 2 (2004) is confirmed to appear as Doctor Octopus, with Norman Osborn aka Green Goblin (Willem Dafoe), Electro from Amazing Spider-Man 2 (Jamie Foxx), and Sandman from Spider-Man 3 (Thomas Hayden Church) also rumored to appear.

Should the Cloak of Levitation get its own movie? Tell us why you love the Cloak  stole the show on What If…?!