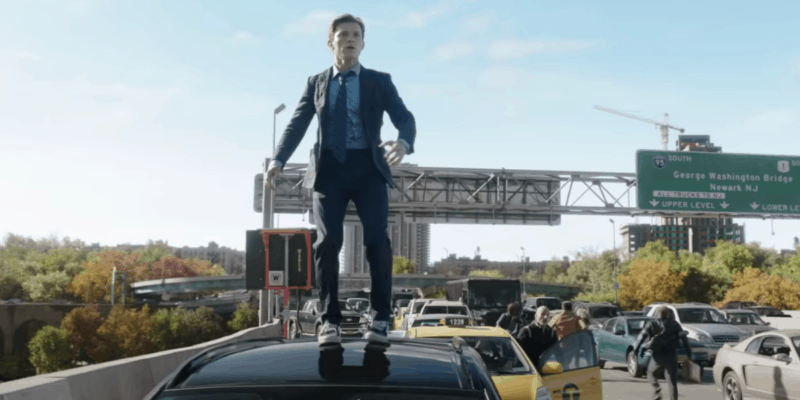 Related: ‘Star Wars’ Has Its Own Little-Known Version of Marvel’s ‘What If…?’

Episode 5 of Marvel’s What If…? presents a glimpse into the corner of the Multiverse inspired by classic comic book series Marvel Zombies. In the episode, a Quantum Realm virus has been unwittingly unleashed that leads to a zombie apocalypse. The virus transforms even the mighty Avengers into soulless, bloodthirsty walking dead. Episode 5 of What If…? features zombie versions of Captain America, Falcon, Iron Man, Doctor Strange, Hawkeye, and many others. The action picks up in a scene reminiscent of the action-packed opening sequence of Avengers: Infinity War (2018) — only this time the Black Order of Thanos is quickly put down by Zombie Iron Man.

As one of the remaining heroes struggling to find a way to stop the super powered zombie horde, Spider-Man uses several film and TV allusions during the episode. For one, Peter Parker used his AV club skills to put together a video he titled, “So You Wanna Survive The Zombie Apocalypse?” — a direct reference to the rules of zombie engagement laid out by Jesse Eisenberg’s character in classic flesh-eater flick, Zombieland (2009).

That said, the newly minted super-hero was just getting his first Avengers action during the events of Civil War. Testing out his new Stark tech suit — while taking on the likes of Captain America, Bucky Barnes, Sam Wilson, and Black Widow — surely is not an optimal condition for Star Wars trivia recall. And, afterall, his Star Wars-inspired plan to take down Ant-Man did the trick.

Based on this new episode of What If…? we know that the hero has seen several movies because of AV club, and his film knowledge comes in handy. It’s possible that the Marvel Cinematic Universe could continue to develop this “film buff” aspect of Peter Parker’s personality — not only to add a humorous element to the character, but as a useful device for entertaining exposition. Perhaps we can assume now that, had Spider-Man had his wits about him during Civil War, his movie buff side would have emerged, properly revealing him as a true Star Wars fan.

“Because Spider-Man has a vast amount of film knowledge, his Star Wars gag doesn’t make much sense. Spider-Man is clearly a film buff in the MCU, regularly using pop culture references and even coming up with plans thanks to the movies he’s seen. Unfortunately, Marvel makes Spider-Man’s debut somewhat odd by playing his supposed lack of Star Wars knowledge as a joke in Civil War. If he were a film buff like the MCU intends, he should know a bit more about the movies he’s watching.”

Related: The Genius of Hank Pym in the Marvel Cinematic Universe

More Marvel’s What If…?

Marvel’s first animated series set in the Marvel Cinematic Universe explores timelines from throughout the endless Multiverse. So far the Disney+ streaming series has featured a timeline with Captain Carter (Hayley Atwell) taking the super soldier serum instead of Steve Rogers, another with T’Challa (Chadwick Boseman) following the path of Star-Lord, a deranged Hank Pym (Michael Douglas) killing off Avengers, a dark origin for Doctor Strange (Benedict Cumberbatch), and the latest — a Marvel Zombies apocalypse. The first season of the anthology series will feature nine episodes, concluding on October 6.

Marvel fans will see more of Tom Holland’s Spider-Man, in the eagerly anticipated Spider-Man: No Way Home, due in theaters December, 2021. The Multiverse promises to be on full display in No Way Home — with rumored appearances from previous Spider-Man actors Tobey Maguire and Andrew Garfield, and Green Goblin actor, Willem Dafoe. Alfred Molina will reprise his role as Spider-Man villain Doctor Octopus, and will be joined by Jamie Foxx as Electro — and any number of past foes from Sam Raimi’s films.

Who knows? Maybe Peter Parker will even have to battle Darth Vader in No Way Home. We’ll find out December 17.

What did you think of Zombie Hunter Spider-Man in Marvel’s What If…? Episode 5? Let us know in the comments!

Comments Off on Did Marvel Finally Make Spider-Man a REAL ‘Star Wars’ Fan?