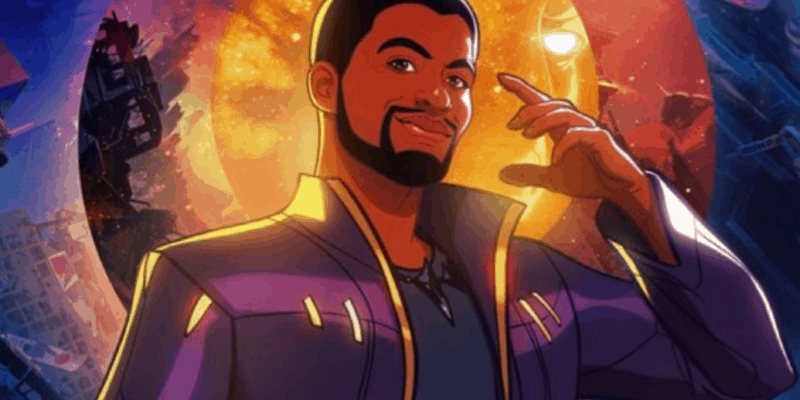 In episode two of Marvel’s What If…? on Disney+, the late actor Chadwick Boseman stole the show. Marvel will feature Boseman in multiple episodes as his last official appearance as King T’Challa, but it’s no easy task honoring the Black Panther (2018) legend and looking forward to the future.

The Marvel Cinematic Universe (MCU) is exploding with new adventures and possibilities as the animated, original series What If…? explores the multiverse within the Marvel Universe.

Featuring the stories of Captain America, Black Panther, Iron Man, Black Widow, and beyond, What If…? serves as the kaleidoscope to what would happen if classic Marvel Comics stories were rewritten.

Taking the stage in episode two, What If…? looks into the possibilities of T’Challa/Black Panther (Chadwick Boseman) taking the place of Peter Quill as Star-Lord.

Unfortunately, Chadwick Boseman passed away in 2020 due to a secret four-year-long battle with colon cancer.

Marvel fans, cast, and executives were at a loss without their king. While it’s no easy task respecting Boseman’s legacy by furthering the Black Panther character in upcoming projects, including Black Panther: Wakanda Forever (2022), Marvel’s What If…? is a homecoming for Boseman.

“He was so gracious. We were so fortunate to have him record for the series. He reprises his role as T’Challa in at least four episodes, in different versions of the character reimagined because of the different states of the universe. We had no idea at the time, when he was recording with us, that this would be his final performance as the character. It is such an honor to have had him record, to have his presence in the show. His performance has the same depth and the same impact that it does in live action; he elevates the material in an incredible way. We’re so humbled.”

Marvel fans celebrate Boseman’s life with the latest episode of What If…? Thanking Marvel for their respect for Chadwick’s career and appreciating the actor’s amazing talents, and fans are uniting over T’Challa.

Episode 2 of #WhatIf is easily one of my favorite things Marvel has ever made. T’Challa as Star Lord is such a fun & interesting twist that gives us a fresh & interesting story & the animation is top tier! I got so emotional hearing Chadwick’s voice again he’s perfect as T’Challa.

Episode 2 of #WhatIf is easily one of my favorite things Marvel has ever made. T'Challa as Star Lord is such a fun & interesting twist that gives us a fresh & interesting story & the animation is top tier! I got so emotional hearing Chadwick's voice again he's perfect as T'Challa pic.twitter.com/iMXcBbhPJi

Here’s an official synopsis of T’Challa’s What If…? episode from D23:

In Wednesday’s episode of What If…?, T’Challa, the young prince of Wakanda, is accidentally abducted by Yondu (voiced by Michael Rooker) and becomes a Ravager. Known as Star-Lord throughout the galaxy, his reputation precedes him… which comes in handy when he crosses paths with the likes of Thanos (voiced by Josh Brolin), Nebula (voiced by Karen Gillan), and Korath the Pursuer (voiced by Djimon Hounsou), to name just a few.

Chadwick Boseman will appear in four episodes total, making What If…? the actor’s last performance of T’Challa/Black Panther.

Don’t miss an episode of Marvel’s latest original series. New What If…? episodes come out each Wednesday on Disney+.

Who’s your favorite Avenger? Let us know in the comments below!