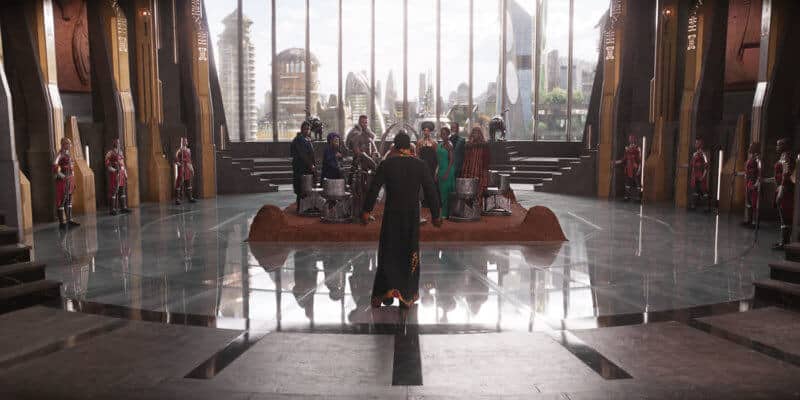 When MCU star Chadwick Boseman (Black Panther/T’Challa) tragically passed away in 2020, Marvel fans and the movie industry mourned the loss of the actor, who had fought an extremely private cancer battle.

The biggest question for the Marvel Cinematic Universe was what would happen with Black Panther 2. Black Panther (2018) was a smashing success that left fans wanting more of Wakanda and its inhabitants, including Shuri (Letitia Wright) and Erik Killmonger (Michael B. Jordan).

The African-inspired setting went on to feature heavily in Avengers: Infinity War (2018). The Marvel Fandom Wiki summarizes the Battle of Wakanda as:

The Battle of Wakanda was fought between the Avengers and their Wakandan allies in the Dora Milaje, Jabari Tribe, Border Tribe, and the Wakandan Royal Guard, against a ferocious offensive of Outriders, led by the Black Order, in the fields of Wakanda outside the Golden City. The Avengers, commanded by Captain America and Black Panther, managed to stand their ground against the Outrider onslaught to protect the Mind Stone, which was in the process of being surgically removed from Vision’s head in Shuri’s lab on Mount Bashenga.

A Twitter account called Black Panther: Wakanda Forever News shared a video of the Wakandan throne room with the caption:

BREAKING: The first behind the scenes look at BLACK PANTHER: WAKANDA FOREVER has surfaced online!

The video gives us a close look at one of the films sets, as it’s being constructed.

BREAKING: The first behind the scenes look at BLACK PANTHER: WAKANDA FOREVER has surfaced online! ?

The video gives us a close look at one of the films sets, as it’s being constructed.

At this time, Marvel Studios President Kevin Feige and his team are doing what they do best and keeping the plot of Black Panther 2 completely under wraps. There have, however, been unconfirmed rumors that we will journey to Atlantis and meet Namor.

“I had a Zoom call with Ryan Coogler, the director and co-writer about seven or eight weeks ago, I suppose. He sort of meticulously took me through all of my character’s beats in the film. He took me through the film, but incorporating my character’s beats. Some of it was very odd, and I think he could see from the reaction on my face to some of the things he was saying [laughs]. He kept sort of stopping, and he kept going, ‘Stay with me, but this is going to work.’”

Black Panther: Wakanda Forever is currently set to debut on July 8, 2022. Per IMDb, it will also feature Lupita Nyong’o reprising as Nakia and Winston Duke as M’Baku. Danai Gurira is currently rumored to be appearing as Okoye. Marvel has confirmed that Chadwick Boseman’s King T’Challa won’t be recast — most fans expect Letitia Wright’s Shuri to take up the mantle of Black Panther.

After the death of his father, the King of Wakanda, young T’Challa returns home to the isolated high-tech African nation to succeed the throne and take his rightful place as king. But when a powerful enemy appears, T’Challa’s mettle as king — and Black Panther — is tested as he’s drawn into a formidable conflict that puts the fake of Wakanda and the entire world at risk. Faced with treachery and danger, he must release the full power of Black Panther to defeat his foes and secure the safety of his people and their way of life.

Are you looking forward to Black Panther 2?