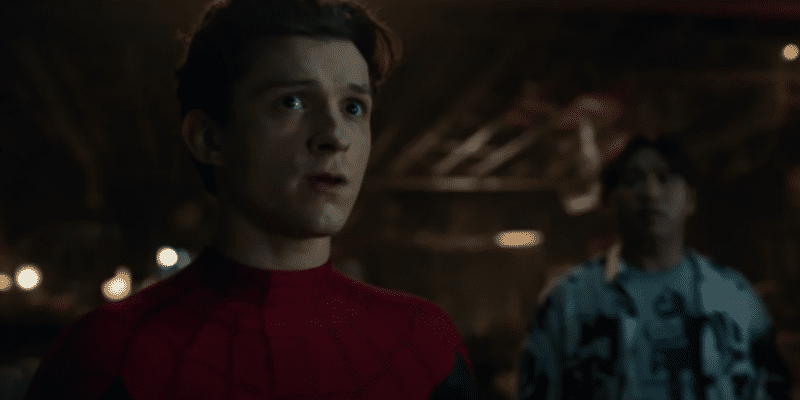 On the heels of the super-hyped Spider-Man: No Way Home (2021) trailer release, Tom Holland is openly contemplating his exit from the Marvel Cinematic Universe and his Peter Parker role. In a new interview, Tom Holland wonders if it may be time to step aside — and make room for Miles Morales.

Marvel Studios and Sony Pictures have unleashed the Spider-Man: No Way Home trailer onto the ever-so-patient Spidey fandom, giving fans a lot more to ponder than just the whereabouts of Tobey Maguire and Andrew Garfield. In the Tom Holland threequel from director Jon Watts, Peter Parker will fight for his life against a Multiverse of villains. If Tom Holland’s Spider-Man manages to survive the onslaught, what’s next?

As No Way Home promises to act as an ending of sorts for the Homecoming trilogy, Tom Holland says he may be aging out of the Spider-Man franchise. Speaking to GQ in an extensive new profile of the actor, Tom Holland said:

“If I’m playing Spider-Man after I’m 30, I’ve done something wrong.”

Already the longest-tenured cinematic Spider-Man, Holland sees an end in sight to his time as Peter Parker, telling GQ:

“Maybe it is time for me to move on. Maybe what’s best for Spider-Man is that they do a Miles Morales film. I have to take Peter Parker into account as well because he is an important part of my life.”

Tom Holland has openly mulled what’s next for his career in interviews of late. He’s said that he approached No Way Home as the end of a franchise, saying:

He’s also said that he’s ready to mentor whomever next suits up in the Spidey red-and-blues. Holland doesn’t know exactly when his time as Peter Parker will end, but he knows that day will come. Holland said:

“When they cast the young kid in Spider-Man to replace me, whether it’s next year or in five years, I’ll take it upon myself to teach them about the responsibilities of being Spider-Man.”

Despite Holland’s age 30 deadline for his early retirement from Peter Parker, Sony Pictures boss Amy Pascal says that the pressure is all internal — noting that Sony wants Tom Holland for the long haul, telling GQ that she’s “…talked to [Holland] about doing, like, 100 more.”

Sony’s Academy Award-winning Spider-Man: Into the Spider-Verse first brought Marvel Comics’ Miles Morales to the big screen in 2018. Voiced by Shameik Moore, Miles Morales is a teen who realizes his spider powers while interacting with other versions of Spider-Man from alternate timelines.

Outside of the Marvel Multiverse, up next for Tom Holland is Unchartered from director Ruben Fleischer, based on the popular video game series. Holland will star as Nathan Drake alongside Sophia Ali as Chloe Frazer and Mark Wahlberg as Victor Sullivan. The film is expected in February 2022.

Previous Sony Spider-Men Andrew Garfield and Tobey Maguire have continued to evade confirmation of their heavily rumored appearance in No Way Home. Still, fans are ready for the ultimate Spider-Man reunion.

Should Tom Holland retire as Spider-Man at 30? Let us know your thoughts in the comments!