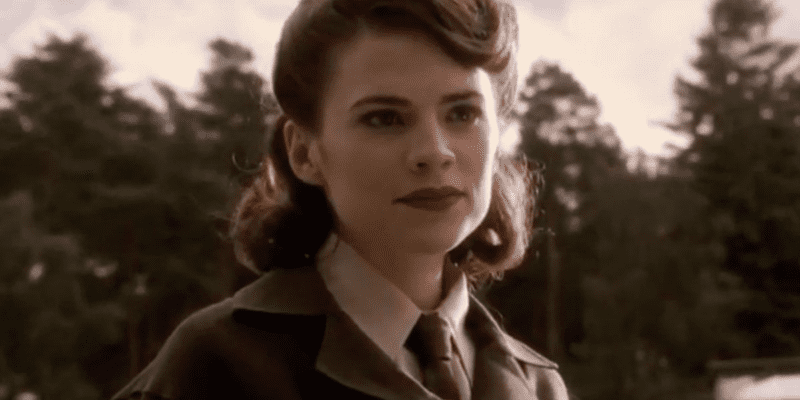 Marvel actress Hayley Atwell was born to play Peggy Carter. Marvel fans have been in love with Atwell’s portrayal of Peggy since she first took on the Marvel Cinematic Universe role in Captain America: The First Avenger (2011). Now, details have emerged about Hayley Atwell’s emotional audition for Marvel Studios — that left director Joe Johnston and others ready to “burst into tears.”

Hayley Atwell remains one of the most popular actresses in the Marvel Cinematic Universe. After Captain America: The First Avenger seemingly put Peggy Carter on ice as Steve Rogers (Chris Evans) crashed into the Arctic Ocean, Marvel Studios kept the fan-favorite Atwell busy. The popularity of Peggy Carter led to the ABC one-shot titled Agent Carter and an Agent Carter series that ran for two seasons, from 2015-2016.

Hayley Atwell also appeared in Marvel Cinematic Universe features as Peggy Carter in Captain America: The Winter Soldier (2014), Avengers: Age of Ultron (2015), and Ant-Man (2015). She also reunited with Steve Rogers for one of the most famous slow dances in cinema history in Avengers: Endgame (2019).

More recently, Hayley Atwell has been setting the internet ablaze with her pitch-perfect portrayal of the super-soldier serum superhero Captain Carter in Marvel’s What If…? series. The Disney+ anthology featured Atwell voicing Peggy Carter in an alternate timeline. In this corner of the Multiverse, Peggy Carter is dosed with the super-soldier serum instead of Steve Rogers. Captain Carter takes up the shield and goes on to save the very fabric of reality as a member of the Guardians of the Multiverse.

It’s no surprise that Hayley Atwell has been able to hook Marvel fans for so long. In the recently released book by Tara Bennet and Paul Terry, The Story of Marvel Studios: The Making of the Marvel Cinematic Universe, director Joe Johnston revealed that Atwell proved her star power from her earliest interactions with Marvel Studios.

“We’re all sitting there in this quiet room… Chris Evans wasn’t in town, so one of the assistants was off-camera, reading his dialogue. We’re shooting this scene and I start thinking ‘This is really emotional…I’m going to burst into tears any second.'”

The book goes on to describe that the other members of the production on hand were also emotionally rocked by Atwell’s powerhouse execution of the script. Johnston called out his first assistant director and the hair and makeup team as full on sobbing while comforting each other during the “amazing” moment.

Hayley Atwell fans are demanding more of Captain Carter. Now that Peggy Carter’s Sacred Timeline arc has come to a conclusion following Avengers: Endgame, audiences see a Multiverse of possibilities for the alternate timeline version of the character. Even What If…? director and writer Bryan Andrews is clamoring for more MCU Hayley Atwell. Andrews told an interviewer shortly after the Captain Carter episode aired that he wants to see Atwell bring this version of Peggy to the live-action Marvel Cinematic Universe, saying:

Hayley Atwell has proven she can play Peggy Carter in any timeline, and fans want to see her given the opportunity. Next, Atwell will star opposite Tom Cruise in Mission: Impossible 7, due in theaters in September 2022. Atwell will also voice iconic video game character Lara Croft in an upcoming Tomb Raider anime series for Netflix.

Do you want more of Hayley Atwell’s Peggy Carter in the live-action Marvel Cinematic Universe? Let us know in the comments!