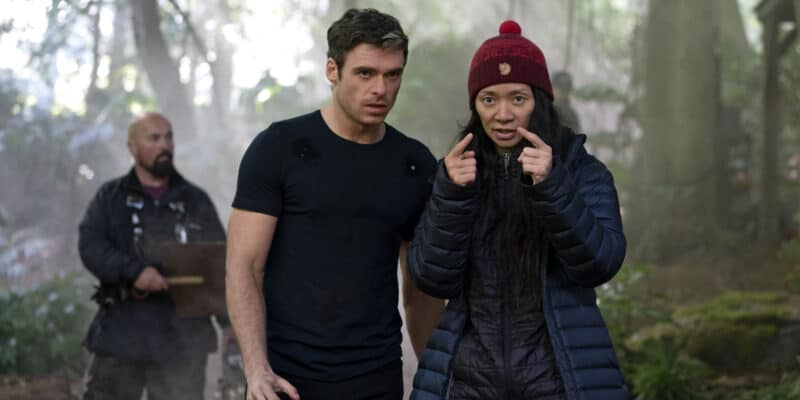 Even though most of the world is yet to see Marvel Studios’ upcoming superhero adventure movie, Eternals (2021) is drawing backlash and currently holds the lowest score on Rotten Tomatoes for any Marvel Cinematic Universe film, teetering dangerously close to being “Rotten” — the movie currently holds a 60% critic score.

One Marvel producer has spoken out in the midst of the controversy on whether Marvel fans will get to see an Eternals sequel in the future of the MCU.

The latest movie from Kevin Feige’s Marvel Studios comes just two months after Destin Daniel Cretton’s Shang-Chi and the Legend of the Ten Rings (2021) and five months since Cate Shortland’s Black Widow (2021) debuted in theaters and on Disney+ — a move which resulted in a highly publicized legal battle between star, Scarlett Johansson (Natasha Romanoff/Black Widow) and The Walt Disney Company.

Zhao’s Eternals is seemingly one of Marvel’s most diverse projects. Phastos star, Henry, recently said he was shocked at the director’s comments regarding his appearance and commented how Eternals is what family is all about. Henry will also play Marvel’s first major LGBTQ+ character with the movie featuring a gay kiss as well as giving a representation of an LGBTQ+ family in the blockbuster franchise. It also sees the MCU’s first major romance from Madden and Chan’s characters.

Marvel is known for its sequels, in fact, the upcoming slate is packed. From Tom Holland’s Spider-Man: No Way Home (2021) to Doctor Strange in the Multiverse of Madness (2022) to Black Panther: Wakanda Forever (2022), Thor: Love and Thunder (2022), and The Marvels (2023), the MCU will bring back plenty of familiar faces over the next two years. For the Eternals and the Deviants, it’s not yet a done deal over whether the characters will be back in their own sequel.

Speaking to the Toronto Sun, Marvel producer Nate Moore alluded to Eternals being a standalone movie for the MCU. He said:

Moore says Eternals won’t offer any hints to the future. “We felt like there was enough story that it could be a contained universe,” he says. “We definitely have ideas of how things can cross over later. But this movie with 10 characters and Dane Whitman and the Celestials and the Deviants, there was enough for us to play with.”

There is said to be a rather shocking post-credits scene that could lead to more stories in the Eternals universe but it seems the jury is still out over a sequel. The report reads:

With Marvel’s original heroes for the most part all getting a trilogy of films, Moore says Eternals 2 and 3 aren’t guaranteed. “It’s not something that is a must-have. Obviously, we have ideas of where we could go, but there isn’t a hard and fast rule where we have to have three of these things and this is the first.”

Zhao’s Eternals is surely a huge film. With an A-list cast and stunning visuals, Eternals has often been cited as one of Marvel’s most ambitious movies so it is interesting that these major players in the Marvel Universe, a group collectively stronger than the Avengers, won’t have more screen time within the ever-expanding MCU if a sequel isn’t confirmed.

Of course, with audience reactions — these ones call the movie “epic” and “beautiful” — and reviews yet to pour in, Moore’s comments on a sequel cannot completely be attributed to Eternals‘ relatively poor performance thus far. At one point, Zhao’s movie dropped into the “Rotten” territory on review site Rotten Tomatoes but at the time of publishing, the new Marvel film is sitting at 60%.

Only time will tell if audiences will fall in love with Chloé Zhao’s Eternals which debuts this Friday, November 5.

Are you looking forward to seeing Eternals? Let us know in the comments below!