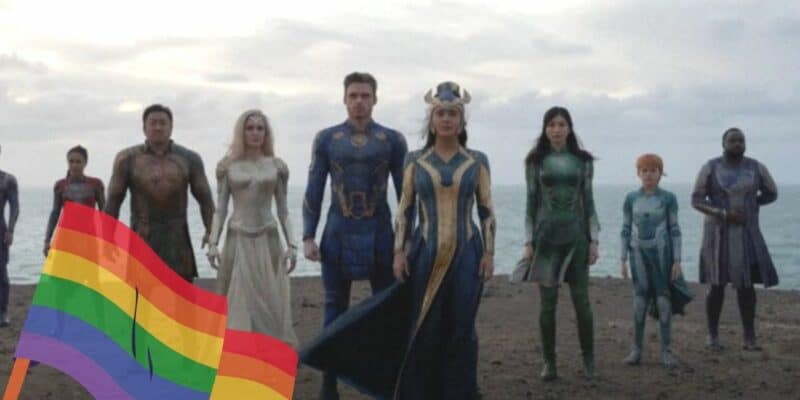 Following Shang-Chi and the Legend of the Ten Rings‘ remarkable release earlier this month, director Chloé Zhao’s Eternals will release in November.

Bringing the eponymous heroes, and their foes, the Deviants, to the Marvel Cinematic Universe, Eternals will also see the MCU’s first LGBTQ+ family and openly gay couple debut in the Marvel movie. Now, star, Haaz Sleiman has addressed the momentous moment in MCU history.

Eternals (2021) is set for an exclusive theatrical release from November 5. The upcoming MCU film will be the third in four releases from the Marvel studio this year. Coming off the back of Black Widow (2021) and the aforementioned, Shang-Chi and the Legend of the Ten Rings (2021), Eternals debuts just one month before the third and final solo outing for Tom Holland’s Spider-Man in Spider-Man: No Way Home (2021).

Henry’s Phastos will be the first openly gay superhero in the on-screen Marvel Universe, with Sleiman playing his husband in the MCU film. The two will also have a daughter in Eternals, making them the first LGBTQ+ family in Marvel Studios’ history. It’s a huge moment for the entertainment powerhouse and one that has been a long time coming. Up until this year, when Tom Hiddleston’s Loki confirmed his trickster character was bisexual in the MCU, the superhero studio had little in the way of LGBTQ+ representation.

Now, Sleiman has addressed what it means to bring this character to the MCU in Marvel Studios’ Eternals. Speaking to Out Magazine, Sleiman discussed the importance of having healthy LGBTQ+ relationships and families in mainstream media.

…Henry and Sleiman will also make cinematic history as same-sex parents with a child in the production. And they kiss on-screen — an MCU first as well. Sleiman is over the moon to make such a mark on Marvel, whose new productions are committed to expanding the diversity of its characters. Historically, LGBTQ+ representation has been fleeting or nonexistent from the Disney subsidiary.

“I feel lucky, and I’m grateful. And…I don’t want to sound arrogant, but I feel like Marvel, they were very smart to cast me in it because I got to humanize the hell out of it. I got to humanize an LGBTQ+ family and show how beautiful they are,” Sleiman says of his groundbreaking role.”

Marvel as a whole has never particularly focused on romantic relationships throughout its over a decade-long history, and even when it has, the relationships haven’t been extremely diverse. Tony Stark and Pepper Potts. Steve Rogers and Peggy Carter. Thor and Jane Foster. What Zhao is showcasing in Eternals is a truly diverse family, and hopefully a signal of what is to come from Kevin Feige’s Marvel Studios.

Sleiman goes on to say how he feels about queer families:

“I think queer families, personally, are way healthier than regular families, in my opinion,” he says. “We stay together and there’s so much love.”

As Out then notes:

The Jack Ryan actor asserts that LGBTQ+ representation on screen is moving forward:

“We’re evolving […] The most exciting thing is the stories that are being told in television and film about LGBTQ people,” he says, adding, “A lot of TV shows are being more thoughtful about portraying queer people in a more fuller way, not so one-dimensional or very stereotype[d].”

It is not yet known how much Sleiman’s yet unnamed character will feature in Eternals. Despite two trailers, the exact direction, and what it means for the future of the MCU, of the upcoming Marvel movie is still quite unclear. Marvel fans know that the Eternals cannot interfere in any events on Earth unless they involve the Deviants, and November is set to bring together some of Marvel Comics’ most iconic adversaries in the next big superhero war.

Are you looking forward to seeing Marvel’s Eternals this November? Let us know in the comments!