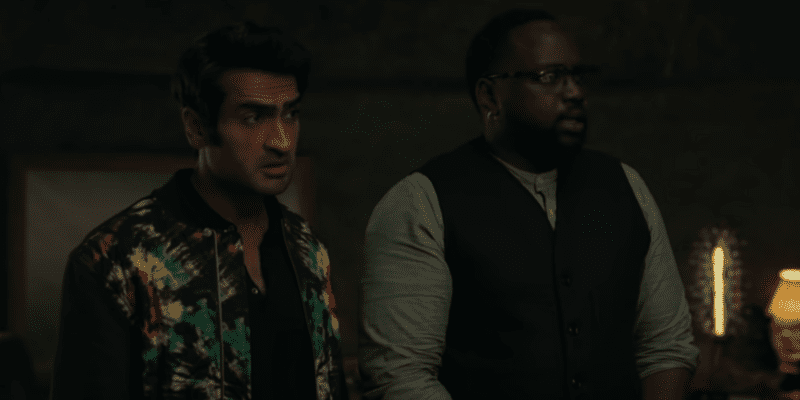 While Marvel’s Eternals (2021) premiere dazzled some lucky fans earlier this week, the rest of the world will have to wait until November 5 to enjoy the new addition to the Marvel Cinematic Universe. The lengthy gap has resulted in The Walt Disney Company issuing a plea to viewers to keep spoilers under wraps.

Marvel movie spoilers aside, one star of the upcoming film shared his reaction when director Chloé Zhao commented on his weight-loss question.

Kit Harington will also star as the human, Dane Whitman AKA Black Knight. It has also been rumored to include Dan Stevens as Deviant antagonist, Kro, but his involvement is yet to be confirmed.

The movie will also see the MCU’s first on-screen gay kiss and prominently feature an LGBTQ+ family — something those involved have shared is a huge step in blockbuster superhero movie-making. It will be Henry that will bring this gay character to the Marvel universe in the studio’s Eternals. One thing that has remained consistent in reports of Marvel’s Eternals is the essence of family and loyalty to each other, and in a recent press conference that was solidified in the cast’s love from the movie, Zhao, and each other.

Inside the Magic attended the recent global press conference where the cast shared their thoughts and feelings of the epic new Marvel outing which sees the Celestials’ Eternals go to war with their longstanding rivals, the Deviants. The cosmic beings will operate in at least two timelines in an event that will most likely have lasting effects on the greater MCU.

While Nanjiani went on his own fitness journey — something Marvel Studios had to ask him to hold back on, at the press conference Henry also shared his experience in dealing with his appearance in anticipation for Marvel’s adaptation of Kirby’s Eternals.

After gushing about the Nomadland (2020) director, saying how he “truly, wholeheartedly trusted Chloé”, the actor went on to highlight the importance of her inclusivity for the project. He said:

“I, Brian, lost faith in humanity as a Black man […] power was taken from us, [and] it resonated with me how I felt as part of society.”

Henry went on to say how he presumed he would need to change for his role as Phastos.

“I thought how much weight do I need to lose?”

“We want you exactly as you are.”

In truth, despite Zhao’s inclusive vision and thoughtful directing process — as evidenced in her other movies too, the superhero movie genre does carry with it some built-in expectations following its longevity and prominence in cinema and on television. Henry’s reaction is heartfelt:

“…as a Black man [it was] unlike anything I’ve ever felt.”

The Phastos actor ended by looking at his diverse cast, saying:

The MCU’s Eternals will bring a plethora of changes from its comic book roots. Whether it’s gender-swapping characters like leader Ajak, played here by Mexican-American actress Salma Hayek, or introducing Lauren Ridloff as a deaf female version of the Eternals speedster, Makkari — a character who was also male in the comics.

Eternals will debut exclusively in theaters on November 5, 2021. No release date for Disney’s streaming service, Disney+, has yet been announced. Marvel fans wanting to get their dose of Phase Four can now stream Cate Shortland’s Black Widow (2021) for free following its simultaneous theater and Premier Access release in July, as well as TV shows WandaVision, The Falcon and the Winter Soldier, Loki, and What If…?. Destin Daniel Cretton’s Shang-Chi and the Legend of the Ten Rings (2021) will come to Disney+ on November 12 AKA Disney+ Day.

Are you looking forward to seeing Eternals? Let us know in the comments below!