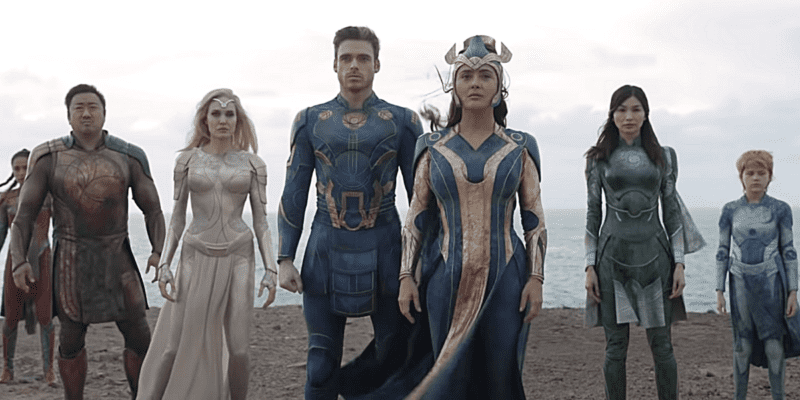 Marvel’s Eternals from director Chloe Zhao is under attack for its depiction of LGBTQIA+ characters. Eternals is set to hit theaters on November 5, 2021, yet internet groups have already begun to target the latest Marvel Cinematic Universe movie. While wide audiences have yet to see Eternals, that hasn’t stopped some from “review bombing” the film with hundreds of 1-star reviews.

IMDb was forced to remove the “audience rating” section for Eternals due to an overwhelming amount of 1-star reviews received by the movie and television website. Self-styled critics of the yet-to-be-released film are slamming Eternals for the film’s LGBTQIA+ representation and inclusion of a gay kiss. It’s been reported that IMDb received more than 400 1-star reviews for Eternals prior to deactivating the “audience reviews” for the movie. Back in 2019, Rotten Tomatoes was also forced to remove their audience score for Captain Marvel following a similar review bombing of the Brie Larson film.

Marvel boss Kevin Feige has been outspoken about Marvel Studios’ commitment to diversity in the MCU moving forward. Eternals, helmed by the Academy Award-winning Chloe Zhao, promises to give Marvel fans the most diverse cast of characters ever included in a Marvel movie. Brian Tyree Henry will portray the Eternal, Phastos — a godlike Celestial with a genius-level intellect — who also happens to be the first openly gay hero in the Marvel Cinematic Universe.

Related: ‘Shang-Chi and the Legend of the Ten Rings’ Just Reached a MAJOR Milestone

Eternals is hardly the first movie to come under fire by online dissenters for progressive representation. Marvel’s Captain Marvel (2019), starring Brie Larson, was similarly review bombed — targeted by a coordinated effort to distort public opinion of a movie with negative reviews — due to it being the first woman-led MCU movie. The acts of the review bombers did not reflect the public’s views at large, as Captain Marvel earned over $1 billion worldwide, making it the fifth-highest box office performer of 2019.

Other movies in recent years, like Lucasfilm’s Star Wars: The Last Jedi (2017) and the Ghostbusters (2016) reboot, were also targets of similar online bullying. The Last Jedi became the highest-grossing film of 2017. However, the early audience vitriol for the Ghostbusters reboot likely contributed to the movie’s poor opening weekend and an overall disappointing box office showing.

As of this writing, Marvel’s Eternals currently holds the lowest Rotten Tomatoes score ever for a Marvel Cinematic Universe film — presently sitting at 63%, even lower than the much-maligned Thor: The Dark World (2013). It should be noted, however, that only a small group of reviewers have actually seen Eternals so far at Marvel Studios premiere events, so the rating can change for the better. Still, the mixed to positive reviews have earned Eternals a “fresh” rating.

Related: A Special Night For ‘Eternals’ Fans at The El Capitan Theatre

Marvel’s Eternals will introduce a new super-team of Celestials in the Marvel Cinematic Universe. The immortal beings from Olympus have been living on earth in secret for millennia until a catastrophe that follows the events of Avengers: Endgame (2019) compels the group to emerge from the shadows and unite against beastly enemies known as the Deviants. Fans have been wondering since the release of the Eternals trailer, just what the Celestial super-team was up to while Thanos (Josh Brolin) was running rampant all over the earth with the Infinity Gauntlet.

What do you think about the LGBTQ representation in Eternals? Let us know in the comments!