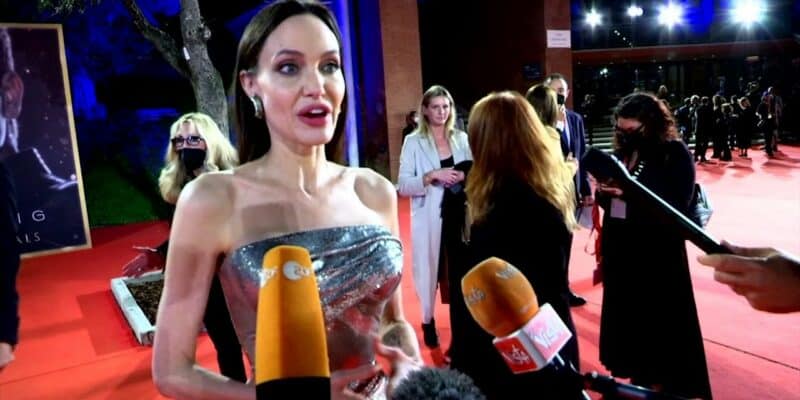 Academy Award-winner Angelina Jolie (Maleficent, Girl, Interrupted, Changeling) is an A-Lister with a full “glam squad” at her disposal every time she makes a red carpet appearance.

However, even stars have bad hair days, and Jolie — who shares five children with ex-husband Brad Pitt — experienced an unfortunate situation with her hair extensions while appearing at the Rome Film Festival’s premiere of Marvel Studios’ Eternals.

Jolie makes her debut as Thena in Kevin Feige’s Marvel Cinematic Universe in the upcoming film, which is set to have an exclusive theatrical release on November 5, 2021.

Although Marvel fans are extremely excited about this installment in the MCU, they were deeply distressed by Jolie’s choppy, uneven extensions — and many took to social media to share their thoughts.

Under One Ceiling asked the question on everyone’s mind:

Why did Angelina Jolie’s style team allow her to go out with janky extensions?

Why did Angelina Jolie’s style team allow her to go out with janky extensions? https://t.co/AKgWjqaNDf

Imma go as Angelina Jolie’s hair extensions from “The Eternals” premiere for Halloween.

Imma go as Angelina Jolie’s hair extensions from “The Eternals” premiere for Halloween.

The mistake made with Angelina Jolie’s hair extensions is SO amateur I really hope whoever is responsible realizes a career in hair is probably a BAD IDEA.

The mistake made with Angelina Jolie's hair extensions is SO amateur I really hope whoever is responsible realizes a career in hair is probably a BAD IDEA.

Now, I’m no hairdresser but whoever did #AngelinaJolie’s hair extensions did it wrong and/or drunk

Now, I’m no hairdresser but whoever did #AngelinaJolie’s hair extensions did it wrong and/or drunk pic.twitter.com/qZT3wruhzx

Celebrity hairdresser Priscilla Valles — who now has her own brand and has done extensions for the likes of Megan Fox, Christina Aguilera, and the Kardashian clan — shared:

“What went wrong with this look is that there are not enough extensions, and they are not high up,” Valles told Page Six Style, adding that correct installation involves “first putting [extensions] on top, and then building them up and making sure there is enough in so you don’t see a demarcation line, which you see clear as day with Angelina.”

Regardless of exactly what went awry with Jolie’s hair extensions, the typically elegant actress is sure to fix the problem with a chic look by the next time we see her on the red carpet.

The official description of Eternals reads:

The Associated Press spoke to Jolie on the Rome Film Festival red carpet. You can watch the actress express her excitement about her upcoming Marvel movie below:

What do you think about Jolie’s unfortunate red carpet hair fail?