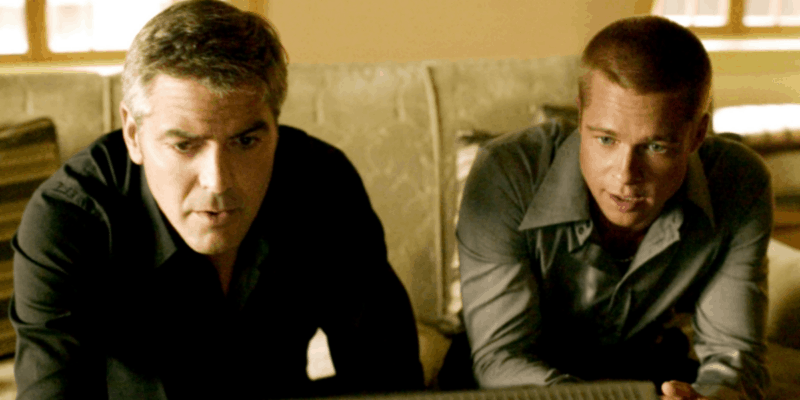 Megastars Brad Pitt and George Clooney are involved in one of the biggest Hollywood bidding wars in recent memory — and it’s likely to affect the future of the Marvel Cinematic Universe. The A-list celebrities Pitt and Clooney are attached to a project from Spider-Man: No Way Home director Jon Watts. The interest in the hot property could keep Watts from beginning work on the Fantastic Four reboot for Marvel Studios.

While Ocean’s 11 (2001) may have been the most ambitious Hollywood crossover prior to Marvel’s Avengers: Infinity War (2018), Academy Award-winning actors Brad Pitt and George Clooney are some of the biggest names to not get sucked into the orbit of the Marvel Cinematic Universe.

Pitt appeared in a hilariously brief cameo as mutant Vanisher in Fox’s Deadpool 2 (2018), and Clooney donned a cape for Warner Bros. in another super Universe as Batman in Batman & Robin (1997). Now the Hollywood heavyweights are taking on Marvel’s Multiverse in real life — by keeping Marvel Studios pick to helm their Fantastic Four reboot, Jon Watts, occupied with another project.

Tapping Jon Watts to adapt Fantastic Four for Marvel Studios was a great call by studio head Kevin Feige. After all, Watts has proven his ability to take a relatively diminished franchise struggling at another studio and get it back on track with the MCU bump. When Sony’s Amazing Spider-Man franchise — starring Andrew Garfield as the webslinger — wasn’t meeting the expectations of Sam Rami’s Tobey Maguire -led trilogy at the box office, Marvel and Sony struck a deal. Jon Watts came onboard to bring Tom Holland’s Spidey into the Marvel Cinematic Universe, directing the highly successful films Spider-Man: Homecoming (2017), Spider-Man: Far From Home (2019), and the upcoming Spider-Man: No Way Home (2021).

It had been assumed by Marvel fans and industry insiders that Watts would turn his attention to the Fantastic Four reboot following the end of production and early promotion of No Way Home. However, following an intense bidding war that included studios Sony, Lionsgate, Amazon, Netflix,  Universal, MGM, and Warner Bros., Apple has reportedly spent top dollar to secure rights to a project written and directed by Watts, with Clooney and Pitt attached to star.

The currently untitled film is a thriller set to feature Brad Pitt and George Clooney as rival underworld fixers competing to finish the same job. This will be the first re-teaming of Pitt and Clooney since the Ocean’s 11 franchise. Watts, coming off the worldwide success of Far From Home (2019) — to the tune of a $1.1 billion gross — is likely to hit the biggest payday of his career.

Details are under wraps for Marvel’s plans to introduce the Fantastic Four into the Marvel Cinematic Universe. With the infinite possibilities provided by Marvel’s Multiverse, the House of Ideas has plenty of options for integrating former Fox properties Fantastic Four and X-Men into the Sacred Timeline — and holy box office — of the infallible Marvel movie machine. Disney and Marvel seized control of both Fantastic Four and X-Men franchises following their acquisition of Fox assets including 20th Century Studios.

Kevin Feige announced that Phase 4’s Fantastic Four film would be helmed by Jon Watts at Disney Investor Day in December of 2020. No other characters have been cast, but that hasn’t stopped fans from dream casting their favorite actors as Reed Richards AKA Mister Fantastic, Sue Storm AKA Invisible Woman, The Thing, and Human Torch.

The most popular fan casting rumors are centered on the husband and wife team from A Quiet Place (2018), John Krasinski and Emily Blunt. While John Krasinski has expressed interest in stretching his acting muscles as Mister Fantastic, Emily Blunt has denied any interest in joining the MCU as Sue Storm — or any other role.

20th Century Fox released Fantastic Four (2005) — starring Ioan Gruffudd as Mister Fantastic, Jessica Alba as the Invisible Woman, Chris Evans as Human Torch, Michael Chiklis as The Thing, and Julian McMahon as arch nemesis Doctor Doom — and  Fantastic Four: Rise of the Silver Surfer (2007). Rise of the Silver Surfer performed well enough, but not as good as its predecessor, effectively putting this version of the Fantastic 4 on ice. Marvel faithful count themselves lucky that Fox’s Human Torch, Chris Evans, was given another crack at Marvel with his world-famous turn as Captain America.

20th Century attempted to bring back the franchise in 2015 with its own Fantastic 4 reboot — starring Miles Teller, Michael B. Jordan, Kate Mara, and Jamie Bell — but the film was considered a critical and commercial flop. Marvel fans expect Kevin Feige to set Marvel’s Fantastic Four reboot up for a major comeback.

Who knows? With the Clooney and Pitt thriller on deck for director Jon Watts, perhaps the director will bring his new movie buddies into the MCU. George Clooney as Reed Richards? Brad Pitt as Doctor Doom? Anything is possible in the Hollywood Multiverse!

Would you like to see Clooney and Pitt join the Marvel Cinematic Universe in Fantastic Four? Let us know in the comments!