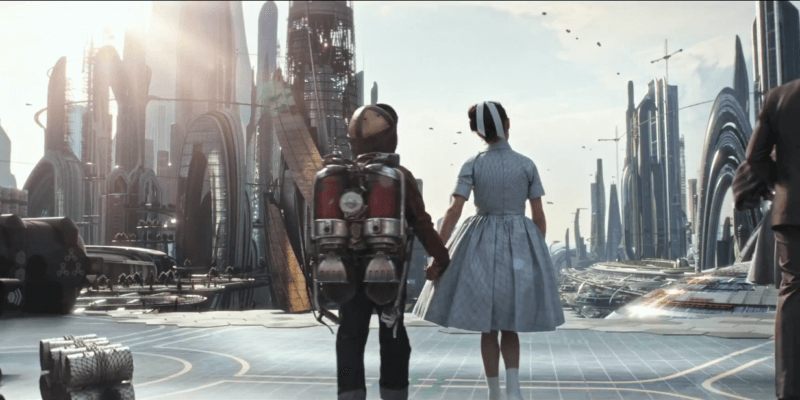 Disney’s movie Tomorrowland, which hit theaters on May 22, 2015, centered on the struggle for just a few people to make a discernable difference in the future. Not your traditional summer blockbuster, the film began and ended with a simple message: Don’t give in to fear.

Recently, none other than The Villiage Voice posted a story entitled, “Apocalypse Numb: It’s the end of the world as we know it — and I feel tired.”

I was about two-thirds of the way through Avengers: Infinity War when I realized just how tired I was. Not “tired” as in bored, but “tired” as in exhausted, depleted — maybe even a little depressed. That’s not, for the most part, a qualitative assessment of the movie — for the record, I found it significantly more engaging than the last Avengers film but not nearly as entertaining as the first. Rather, it’s a response to the constant, bludgeoning promise of repeated apocalyptic devastation.

As a moviegoer, I am tired too.

I have been cowed via the consistent browbeating from Hollywood’s fascination with the end of days. However, when that onslaught becomes too much to bear — or when too many of my heroes vanish at the whim of a demigod — I turn to tomorrow.

Better yet, I turn on Tomorrowland.

The Brad Bird (director) and Damon Lindelof (writer)-helmed opus had a simple premise [as described by IMDB]: “Bound by a shared destiny, a teen bursting with scientific curiosity and a former boy-genius inventor embark on a mission to unearth the secrets of a place somewhere in time and space that exists in their collective memory.”

However, Tomorrowland was no simple film…

“Tomorrowland is a highly original, occasionally even visionary piece of sci-fi filmmaking, but that doesn’t necessarily make it a good movie,” wrote Slate’s Dana Stevens, and a whole lot of folks agreed. With a 50% (rotten) review score on Rotton Tomatoes and a 49% audience rating, the film underperformed at the box office and faded into obscurity.

Dreamers, let us know if you spot any #TomorrowlandMovie cosplay at #D23Expo this weekend! Here's a flashback to 2015: pic.twitter.com/ROkrs8UoCw

Four years ago, two friends started TomorrowlandTimes.com, a site dedicated to “unofficial source for the latest news, rumors, viral marketing, and interviews on the upcoming Disney family action-adventure movie, Tomorrowland!” I’ve been a loyal follower of their @TheTomorrowTime Twitter feed, and I was thrilled to connect with Nick to get his take on the legacy of the film.

“Tomorrowland Times was forged out of ‘The Optimist,’ an immersive alternate reality game produced by Walt Disney Imagineering Research & Development which took place in the narrative world of the (yet unshot) film, two years before its release,” he explained of the game [ covered extensively by ITM on YouTube ]. “My co-pilot Hastin and I met playing that game during its six-week run in Summer 2013. When it was finally revealed the game tied into the movie (a fact not made immediately apparent), we wanted to have a place for Optimists to speculate and anticipate the film’s release.

“In the ensuing years, we’ve attempted to keep the flame burning by reporting on the fan community’s emerging cult status,” he said.

[NEW POST] Mystery Boxes and the Future of Tomorrow: Our Conversation with Brad Bird. http://t.co/pC1RXWOztp pic.twitter.com/LYS4qFWmrn

The legacy and meaning of any film — even a wildly successful film — is often difficult to place. But with a movie whose reception was so mixed, I was glad to solicit an expert.

“Big question,” said Nick. “I spent a hearty sixteen minutes on YouTube breaking down exactly why I think Tomorrowland is a brilliant movie, and how it has become a functioning mythology in my life.

“Tomorrowland is a challenging film that asks a compelling question: When the structures of yesterday fail us, what of today will carry us into tomorrow?”

The film is, in fact, built on nostalgia, what with the beginning of the movie finding its place and pace during the 1964 Worlds Fair, with “A Great Big Beautiful Tomorrow,” the theme from Walt Disney’s Carousel of Progress, and the attraction “It’s a Small World” providing a soundtrack and setting for young Frank Walker’s adventure.

“Nostalgia can be a dangerous thing,” explained Nick. “After Frank [George Clooney’s character] is cast out of the city of the future, he escapes into his past. People failed him, so he turns to the raw creation of technology.

“[Frank’s] dovetailing character arc with Casey [Britt Robertson], a renegade optimist focused only on destroying that which inhibits progress with no eye toward actual creation, takes them both on a shared journey to an ideological reconciliation of the framing question: take inspiration from the past without succumbing to that which caused past failures.

“An ode to the scientific method, embracing failure itself as a necessary process of creation,” he said.

Your invitation is waiting: http://t.co/W0BHo9034Shttps://t.co/b6rUlOekSq

An inherent optimism was clearly in the movie’s DNA.

Named, of course, after the embodiment of Walt Disney’s futurism — Disneyland’s Tomorrowland in Anaheim — the film’s premise tugged at the heartstrings of anyone who watched “Uncle Walt” (or even Michael Eisner) on Sunday nights.

“People had a very positive idea about the future, even though there were bad things going on in the world,” Bird said to the LA Times. “But there was a sense we could overcome them. And yet now we act like we’re passengers on a bus with no say in where it’s going, with no realization that we collectively write the future every day and can make it so much better than it otherwise would be.

“We have to shut out that mentality, those voices that are scared and don’t know anything. And we have to bring in new ideas. Or we’ll end up with nothing left.

How often do all of us wish we’d retained a measure of the inherent optimism we once felt while watching Disney’s “Man in Space” or the PBS program “3-2-1 Contact” or even “merely” seeing a shuttle lift off from the very launch pads that Casey tries to save in Tomorrowland? How often does the act of putting on the news, check our Twitter feed, or watching a movie feel like a parody of Frank’s opening speech or an actual viewing of ToxiCosmos 3: Nowhere to Go (a fictional film advertised in Tomorrowland)?

In fact, much of the critique of Tomorrowland lay in the fact that the first chapters of the flick are precisely what most viewers expected (wanted?) when they sat down in cineplexes, i.e., a view of “tomorrow” which is much different than the world they see out their window today.

And it was the juxtaposition of that gleaming future (symbolized by Athena — played by Raffey Cassidy — and the new realm she represents) and the philosophical and physical conflict that takes place in the failed Tomorrowland (embodied by the villain, Nix, played by Hugh Laurie) which left audiences confused.

“People ask, ‘Why did you spend so much time in a car when you could have been in Tomorrowland?’ But the movie was always intended to be a road movie, and its title seemed to suggest, to some people, that the whole movie was going to take place in Tomorrowland,” said Bird to Oh My Disney in October 2015. “But just running around Tomorrowland is not a movie.

“There has to be a conflict… We set out to make a fable or a fairy tale about what happened to the positive view of the future and how can we get it back and pursue that idea.

“For better or worse, we did.”

“We were trying to say something about the future and about the way people think about the future that tapped into Walt Disney’s fundamental idea back in the 1950s that the future was bright, and that’s a much harder idea to get across these days because we have a fixation with the apocalypse. It feels like we keep making these movies where the future isn’t bright and Tomorrowland was gonna try to thread that needle. I still celebrate the ambition of the movie and I certainly celebrate Disney’s big swing on letting us make it.”

For those who make the impossible… possible. #Tomorrowland
Your invitation is waiting: http://t.co/W0BHo9034Shttps://t.co/xWdntDtX8L

Four years later, it’s the conflict, and the call to overcome fear — particularly fear of the future — which remain the essential traits of the movie.

“The film has proven to be disturbingly prescient — particularly with its isolationist villain — which, for me, is a hallmark of great science fiction,” continued Nick from Tomorrowland Times. “I can tell you the message that the film spoke to me, based solely on the content of its cinematic ‘text.’

‘The final image of the film is the pure metaphorical imagery of myth,” he added. “From Casey’s isolation, alone in the field of wheat, through her shared journey, we’ve arrived at an ideological evolution that places us all in the field together.

“It’s not enough for us to be dreamers,” he said. “We’ve got to dream together.”

Which, in a way, brings us right back to the message behind Tomorrowland the film, and its progenitor, “Tomorrowland” in the Disney parks.

“Sometimes a piece of art comes into your life, and it’s exactly what you need, right when you need it,” said Nick when asked about the movie’s impact on his own life. “There are times it feels as if Tomorrowland was made just for me.

“I’m so grateful that Disney took the risk to make it a reality… [and] I can’t responsibly say what Walt would have thought, but I like to think Tomorrowland is ambitious ways that would have made him proud.

“At the very least, this movie inspires me in the same way he did,” he said.

For me, the real worth of Tomorrowland lay in its impact on my oldest son, Jack.

Just five at the time, it was the first “big boy” movie he and I attended, and it — and Disney movies in general — became a source of camaraderie. The film replicated the joy, both of discovery and adventure, I felt while, at Jack’s age, I watched already-classic Disney films like Treasure Island, Swiss Family Robinson, Tron, and The Black Hole at the annual summertime film series at the local library; or when I turned on “The Wonderful World of Disney.”

Unfortunately, some of those programs and pieces — seminal to my development — now seem dated, slow, and sometimes embarrassingly out of step with modern audiences (and my own little boys).

But here was Tomorrowland, centered on the struggle to make a  difference; a film about the responsible use of technology and natural resources. Yes, there were dire consequences should the group fail, but in the end, it’s a movie — a Disney-made summer blockbuster — which began and ended with a message that unequivocally stated, “Feed the right wolf…”

For that, and for giving Jack and I a moment that no critique or pessimism can ever take away, I thank Bird, Lindelof and the cast and crew of Tomorrowland. And this year, three years out from its debut on May 22, 2015, my family and I will take the time to dream. 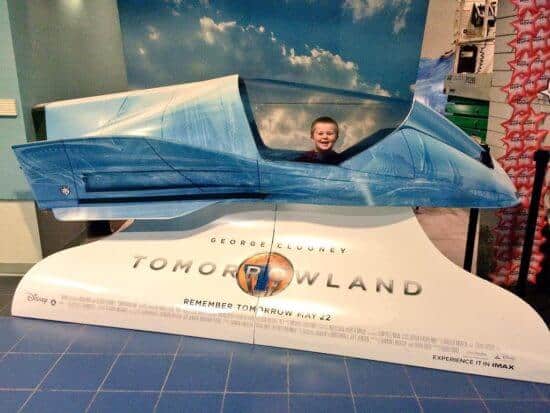