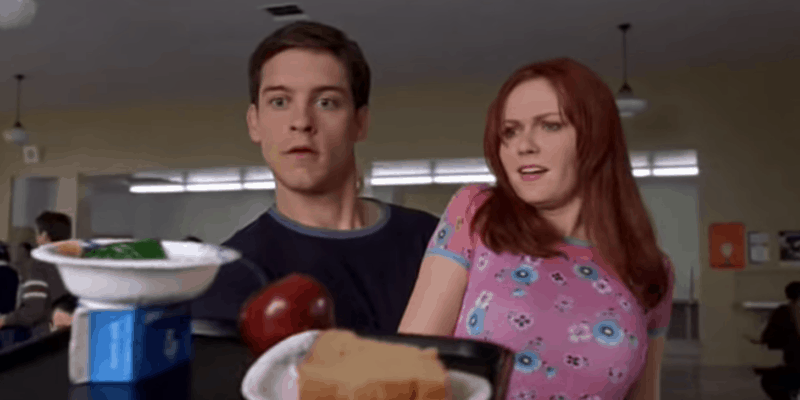 Before there was Tom Holland and Andrew Garfield, there was Tobey Maguire, the original live-action Spider-Man. Tobey originated the character on the screen in 2002, and the film met great success, pulling in two more movies that blew up at the box office.

The movie, of course, had some amazing special FX and CGI implemented, but there was one scene in particular that had viewers stunned, and none of it was fake! Once we see Peter Parker start to discover some of his new “talents” after being bit, such as the ability to see without glasses, we also see him swoop up Mary Jane (Kristen Dunst) as she is falling, catch her lunch tray, as well as all of the food on it.

The scene is so swift and perfect that many would have thought the food catching was CGI, but it was not — Maguire actually caught the tray and all of the food on it. Director Sam Raimi had to fight Sony to keep the scene in the movie, as they wanted to remove it due to the time-consuming nature that the filming would take. The single scene was shot 156 times until Maguire could catch all of the food and lasted 16 hours.

Tobey’s hand would have sticky glue on it so that his hand would be able to stick to the tray, and the food was glued to their plates. But, in order to perfectly catch all of the food on the tray, it was all up to Tobey. The scene is one of the more memorable ones from the film, and now knowing that it was all real, I personally have a new respect for it.

Tobey has been out of the Spidey suit for quite some time now but will be back at it on the big screen this year. Spider-Man: No Way Home will bring together all three Spider-Man actors in the new Marvel movie as Holland’s version of Peter Parker opens the Multiverse.

If you want to re-watch the iconic scene, you can here below!

What do you think of Tobey Maguire having to try to catch the food 156 times? Let us know in the comments below.