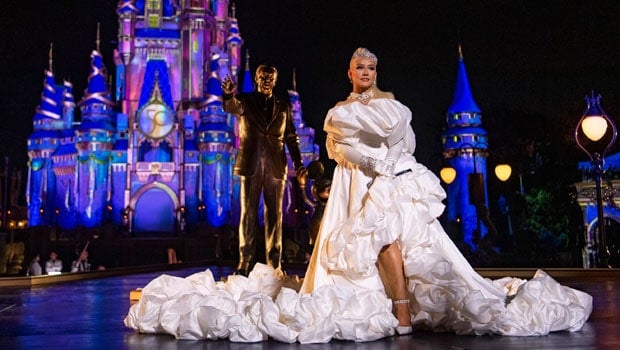 Dreams really do come true and that has certainly been true for the Grammy Award-winning superstar, who started her career as a Mouseketeer on The Mickey Mouse Club, which catapulted her into solo stardom. She then went on to release numerous albums and embarked on world tours, which made her a household name in the pop culture world. She is known for her powerhouse voice, which can be heard in numerous songs, including the Disney classic from Mulan entitled “Reflection” (Christina re-recorded the classic Disney song for the 2020 Mulan remake).

In an exclusive interview with People Magazine, Christina spoke about how performing at the event was like coming back home.

“I mean, my first Disney experience was in Tokyo Disneyland when my dad was in the military and we lived there for three years. So it’s always been embedded in my childhood roots, but then I ended up working for Disney from the Mickey Mouse Club when I was my son’s age.”

She then went on to say that it makes her heart full to now have two children that she adores and is able to bring them back to the place where her life changed forever.

“Now with my kids here, I brought my daughter to her first time at Disney World. She’s been to Disneyland, but having her come back to where mommy used to work, it’s just a beautiful thing to pass down to your own children,”

Christina also spoke about Disney’s Hollywood Studios (formerly known as MGM Studios) as the grounds of where she laid the foundation for her universally successful career. “Reflection” is the first music video that starred Christina, and it just so happened to be filmed at EPCOT!

Christina’s performance was classified as the start of Disney World’s 50th anniversary festivities, known as The World’s Most Magical Celebration”, which is going to run over the course of the next 18 months. Guests visiting the Parks will be able to indulge in all types of special cuisine, treats and grab limited edition goodies, souvenirs and make memories to last a lifetime. Guests will also be able to check out the two new nighttime shows taking place: Harmonious at EPCOT and Disney Enchantment at Magic Kingdom.

Did you enjoy Christina’s performance for Walt Disney World’s 50th anniversary? Be sure to let us know in the comments!