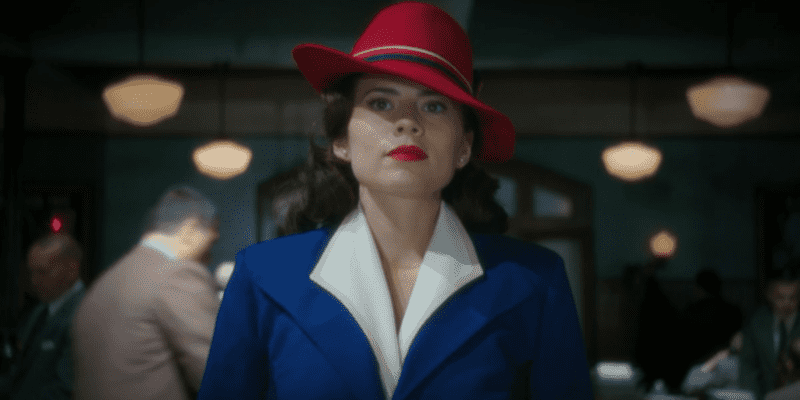 As Disney+ series like Loki and What If…? have transformed the linear path of the Sacred Timeline into the prism of the Multiverse, fans are looking for clarification on what is and what isn’t Marvel Cinematic Universe canon. Now, a new book from Marvel Studios has seemingly confirmed that the ABC series Agent Carter (2015-2016) starring Hayley Atwell is, in fact, MCU canon — while also labeling Agents of S.H.I.E.L.D series as outside of canon.

However, following the release of The Story of Marvel Studios, one of the book’s authors, Tara Bennett, has taken to social media to back off making any official pronouncements that appear to be implied in the text.

In The Story of Marvel Studios: The Making of the Marvel Cinematic Universe, the history of MCU projects is recounted, detailed, and categorized. One section focuses on the time period in 2015 when the Agent Carter series was released. While the book stops short of explicitly naming Marvel’s Agent Carter as canon, the text confirms that the series’ “canon storytelling” is directly related to the Marvel Cinematic Universe films. The excerpt reads:

Launched on January 6, the series debuted on the ABC midseason slate. Notably, Agent Carter marked the first time an MCU-originated character would transition from the big screen to the small screen, with canon storytelling that would eventually dovetail back into future films.

Hayley Atwell as Agent Peggy Carter in the MCU

Hayley Atwell and her portrayal of Peggy Carter in Captain America: The First Avenger (2011), the Agent Carter one-shot, two seasons of Marvel’s Agent Carter series made her a Marvel fan-favorite. Additionally, Atwell had smaller big-screen roles in Captain America: The Winter Soldier (2014), Avengers: Age of Ultron (2015), Ant-Man (2015), and that memorable slow dance with Steve Rogers in Avengers: Endgame (2019).

More recently, Hayley Atwell has appeared in season one of Marvel’s What If…?, voicing an alternate timeline version of Peggy Carter known as Captain Carter. In Captain Carter’s timeline, Peggy receives the super soldier serum instead of Steve Rogers, and goes on to fight alongside Rogers until she is called upon by The Watcher (Jeffrey Wright) to become one of the Guardians of the Multiverse — alongside Party Thor (Chris Hemsworth), Killmonger (Michael B. Jordan), Doctor Strange Supreme (Benedict Cumberbatch), Star-Lord T’Challa (Chadwick Boseman), Black Widow (Lake Bell), and Gamora (Cynthia McWilliams).

Atwell’s performance in What If…? has led to a resurgence of popularity for the actress and her iconic MCU role as Agent Carter. Fans are eager to see Atwell’s Lara Croft in the upcoming Tomb Raider anime series headed to Netflix.

Fans of Agents of S.H.I.E.L.D. have watched for years as the Marvel Cinematic Universe left the revived version of Agent Phil Coulson (Clark Gregg) out of continuity. Coulson was killed by Loki in Avengers (2012) and the tragedy famously acted as a rallying point for the Avengers to officially assemble as Earth’s Mightiest Heroes. However, while Agent Coulson was brought back to life in Agents of S.H.I.E.L.D., it looks like his further adventures are unofficial MCU legends.

Tara Bennett, author of The Story of Marvel Studios: The Making of the Marvel Cinematic Universe, responded to a series of Tweets with fans debating the canon status of Agents of S.H.I.E.L.D.. saying, “We wrote the book. It does not say AoS is part of the MCU.”

However, the since deleted Tweet received some backlash, resulting in Bennett posting a screencap statement somewhat backing off her earlier remarks. The author shared, in part:

Our books have no binary proclamation of any kind about shows…In 250k words of contextual narrative, they do explain who creatively conceived of AC [Agent Carter] and ran it and then how it then folded into the MCU.”

This attempt at clarification seems to de-emphasize the “canon storytelling” mentioned in black and white in the text of the book — qualifying the canon status of Marvel’s Agent Carter as canon-ish. It also allows for the debate about which Marvel shows are canon, and which are not to continue to rage on.

Marvel’s other pre-Disney+ series, like Netflix’s Daredevil, Jessica Jones, Luke Cage, and Iron Fist are also often brought up in the MCU canon conversation by fans. This speculation has grown given the rumors that Charlie Cox who portrayed Matt Murdock on Daredevil will reprise his role in the Multiversal madness of the upcoming Spider-Man: No Way Home (2021).

Do you think Agent Carter and Agents of SHIELD should be Marvel Cinematic Universe canon? Let us know in the comments!