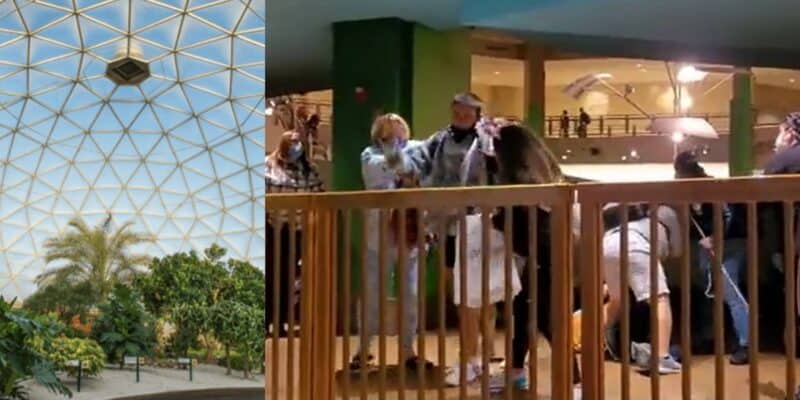 With the Thanksgiving holiday still underway and Christmas right around the corner, Guests are flooding the Disney Parks. Whether Guests are traveling with family, friends, or on a solo trip, it’s inevitable tempers among family and other Park-goers may arise. We would hope however Guests could control themselves from fighting in a public place, but in this video, EPCOT Guests seem to have had enough with each other.

In the video, it looks like a Walt Disney World Resort Guest was visiting EPCOT’s The Land Pavilion in the World Nature neighborhood of the Disney Park when they spot a fight between Guests and start videoing. The Guest videoing looks like they are on the boat for Living with the Land preparing to exit. The fight breaks out in the exit area of the popular boat ride attraction, Living with the Land.

RELATED: Disney Guest Jumps and Falls Out of Attraction In Attempt to Steal a Cucumber

The argument is between what looks like two groups of people and turns loud with pushing and shoving. It seems like some people in the party try to break up the fight. A Cast Member quickly arrives at the scene. @DisneyVengenz took to social media to share the video on November 27 with the message, “It’s the most wonderful time of the year!”

Comments to the video include tweets like, “More than likely the stupidly high ticket prices, long lines, stupid Genie+, and all of the “wonderful” new Disney “upgrades.”, “Seriously….kids all over the place, etc.. horrible”, and “Dude, there’s enough cucumbers for everybody. Calm down!” following up on the cucumber stealing incident this past summer.