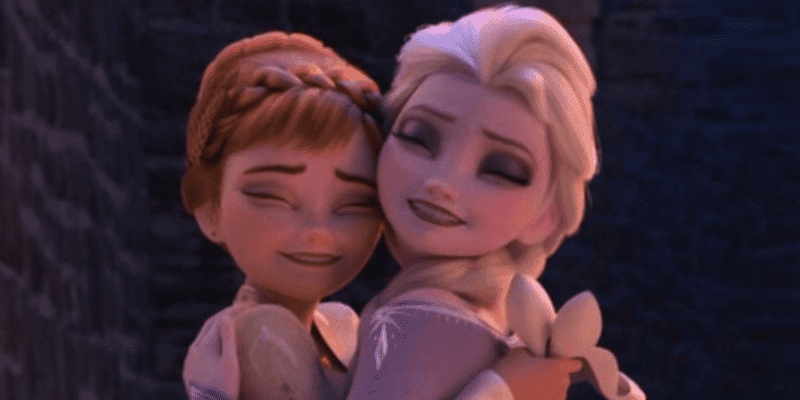 One of the most heartwarming parts of the Frozen franchise is the sisterly bond between Anna (Kristen Bell) and Elsa (Idina Menzel). Although the duo is very different from one another — just like many sisters in real life! — their love for one another always overcomes anything that threatens to come between them.

In fact, at the end of the megahit first movie — Disney’s Frozen (2013) — Elsa’s love for her little sister is what finally thaws Anna’s frozen heart, and ultimately helps Elsa understand how to control her ice powers. Spoiler alert – love is the key!

Then, in Frozen II (2019), the sisters’ adventures continue as they visit the seemingly cursed Enchanted Forest with their loyal companions, Olaf the snowman (Josh Gad), Sven the reindeer, and Kristoff (Jonathan Groff).

But, as it turns out, there was almost a world in which Anna and Elsa weren’t sisters in the Frozen franchise! As unbelievable as that is to imagine now, it’s true.

Buzzfeed shared a brief synopsis of this surprising piece of Disney movie trivia:

Anna and Elsa were not originally sisters in Frozen. Instead, Anna was a peasant that asked the evil Snow Queen (Elsa) to freeze her broken heart.

Business Insider went on to share additional information about the villainous version of Queen Elsa, who was set to have “spiky blue hair” and a “coat made of living weasels”:

“Elsa was going to be the complete antagonist,” says director and screenwriter Jennifer Lee in the book “The Art of Frozen.” “They kept calling her the ‘villain.’ But there came a point where we said, ‘We can’t use that word anymore.’ You care about someone who’s been forces to hide who they are. Elsa’s not a villain, she just makes some bad choices because she’s in a very difficult situation.”

According to the ABC special, a big push for the character’s redesign came from songwriter husband and wife duo Robert Lopez and Kristen Anderson-Lopez who were working on a song to go with the character.

As you can see in the early Frozen concept art [above] Anna’s look remained largely the same throughout the Disney film production process, but Elsa changed significantly, ultimately becoming the iconic character we know and love today.

At this time, while rumors continue to circulate about the possibility of a Frozen 3, nothing has been confirmed by Walt Disney Animation Studios. You can currently watch Frozen, Frozen II, and Olaf’s Frozen Adventure on the Disney+ streaming platform anytime.

Are you glad Anna and Elsa ended up being sisters? Which Frozen movie (so far) is your favorite?