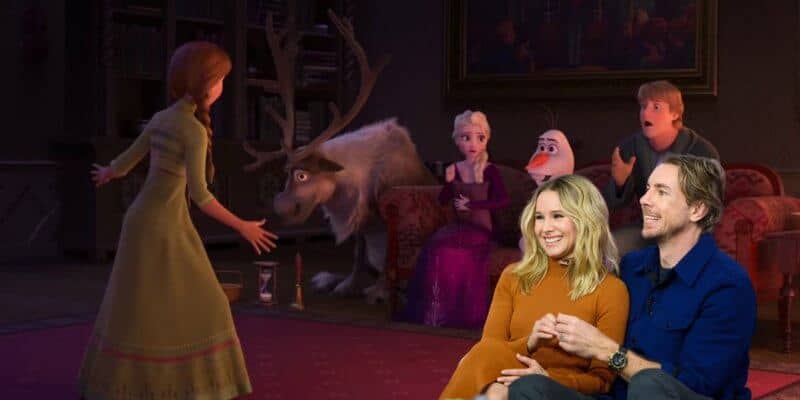 Well, it looks like for the first time in forever, Kristen Bell who stars as the fan-favorite Disney Princess turned Queen of Arendelle Anna from Frozen is going to be playing herself in a brand new game show created by NBCUniversal.

Kristen Bell and her husband (and actor) Dax Shepard are often recurring Guests on The Ellen DeGeneres Show, and they have been known to cause some crazy antics during games and challenges. Now, it looks like they want to bring their at-home family game nights to the big screen.

As confirmed by Deadline, “NBC has ordered Family Game Fight, which will see the actors both host and compete in the ten-part series. The series, which will test brains, brawn, and family bonds over the course of an hour, will see Bell and Shepard be adopted into a family of four as they compete in a series of games with a big cash prize up for grabs.”

The game show is being produced by DeGeneres’ A Very Good Production, so viewers who love to watch the crazy mini-games Ellen often includes in her talk show will likely be big fans of Family Game Night. When Bell and Shepard were asked about the new game show, they gave some context on why the new venture was so exciting.

“For one of our first dates, I invited Dax over for a game night at my house with a bunch of friends,” Bell said. “He said he fell in love with me there because I was a very tiny person bossing everyone around. I fell in love with him too because he’s a very large person who could boss everyone around, but chooses not to. I’m so excited to host Family Game Fight and play all day with my best friend.”

“Kristen is my favorite human to work with,” Shepard said. “She’s the most consistently funny, playful and joyful scene partner I’ve ever had. She’s also incredibly fun to look at.”

Lucky for the couple, that fun and electric chemistry that they feel when playing games translate to a much wider audience. NBCUniversal has wanted to team up with the team for quite some time noting, “We’ve been wanting to work with them as a duo for years. Their energy is infectious, their comedic sensibility comes so naturally, and their transparency about their relationship is what makes them so relatable and lovable. Family Game Fight was born out of the true competitive, yet playful and loving spirit Dax and Kristen have towards each other. We are excited that we get to work with them as on camera talent and side by side as producing partners.”

Considering the show will be a Universal production, it would be interesting to see if it could be integrated into the Universal theme parks in the future. Fear Factor, another Universal game show, found a stage show home at Universal Orlando Resort in the past where Guests could partake in their very own episode, so it is not out of the realm of possibilities when it comes to possibly seeing Family Game Night turned into a different interactive stage show in the future. That being said, the thought is purely speculation at this point.

Are you a fan of Kristen Bell and Dax Shepard? Will you watch Family Game Night?