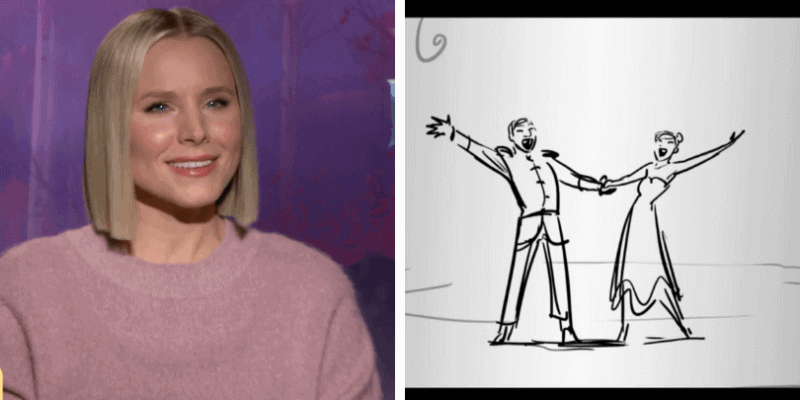 Frozen 2 fans, we missed out on an incredibly catchy duet between Princess Anna and her Kristoff. Called, “I Wanna Get This Right,” the song was intended to be a number centered around Kristoff’s big proposal.

Entertainment Tonight shared an exclusive video that shows preliminary storyboard sketches of the scene with clips from the recorded song played over while the cast, directors, and composers sing its praises (pun intended).

You can watch that video by clicking on the link below:

This deleted #Frozen2 song by @KristenBell and Jonathan Groff is a bop! https://t.co/DEIBV2JXBl

This was a song loved by the two who had to sing it (Bell and Groff) as well as other members of the cast from Josh Gad to co-director Jennifer Lee.

Kristen Bell said, “It was this throwback power ballad where we’re singing to each other like rock stars.” She then broke out singing the song, “I wanna get this right, baby! I wanna thrill you in the way you deserve!” Bell explained that her kids picked up the song as she was learning it for the movie, and it is now a family favorite sung at least once a week.

Jonathan Groff, on the other hand, did not remember the lyrics as well as his co-star, but he did remember it being “a jam.”

A love song intended for a male audience

Like the song, “Lost in the Woods,” the song “I Wanna Get This Right” was meant to show Kristoff as a role model for all the young princes watching. The message of this deleted song was: be “Prince Sincere” instead of worrying about being “Prince Charming,” as Kristoff tried so desperately to be smooth and suave. Songwriters Robert Lopez and Kristen Anderson-Lopez briefly discussed how the song was a reflection on their courtship as Robert tried desperately to be smooth and win his love despite having zero male role models to emulate.

Regardless, Kristoff proved to be a man who could be sincere, step back while his woman took the lead and became her own hero, and still win her heart. So, even though we lost out on a great musical number, the film did what it set out to do, and that’s what’s important.

Disney’s Frozen 2 arrives on Digital February 11 and then on Blu-Ray February 25.

What do you think of this deleted song? Are you sad it got cut, or are you glad Kristoff proposed the way he did? Let us know in the comments!