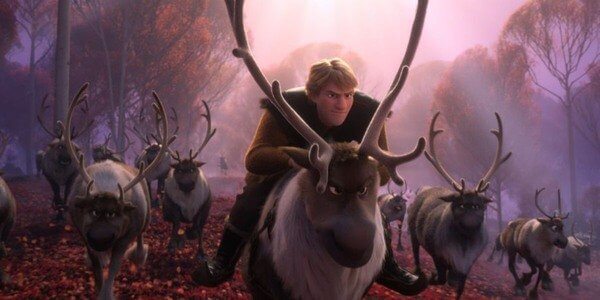 Light spoilers ahead! If you haven’t seen Frozen 2 yet, you may want to bookmark this article for later!

Frozen 2 gave us so much more to love about all of the characters we know and love from the first film, but one character arc in particular has us swooning — Kristoff!

With Kristoff portrayed opposite Hans in the original Frozen film, it was not difficult to fall in love with his character given that stark comparison. And while he’s always seemed like an all around great guy, he absolutely seals the deal as our favorite Disney prince thanks to the character development in Frozen 2.

It's SO GREAT that little boys witness Kristoff expressing his deep love in Frozen 2. Love is NOT a vulnerability. Masculinity doesn't have to be toxic. Men, boys, sing your heart out about how much you can love! Thank you #Groffsauce for this beautiful example!!! #Frozen2

Where most Disney princes are all about showing that they’re able to overcome villains or obstacles and quite simply save the princess, Kristoff always thinks of himself and Anna as a team. In some of the film’s most tense moments, we see Kristoff offering his support by standing at Anna’s side and working with her to solve the problem rather than recommending she step aside so he can handle it.

can we appreciate how frozen ii said "toxic masculinity?? screw that." and gave kristoff a power ballad about his feelings?
IMAGINE ALL THE LITTLE BOYS WATCHING THIS.
IMAGINE THIS BEING NORMAL TO THEM.

It’s a totally refreshing take on masculinity that we seldom with male Disney characters, particularly those with a princess love interest. Frozen 2 even relays Kristoff’s feelings for Anna with “Lost in the Woods,” a killer 80s-power ballad style musical number (complete with reindeer backup vocals, of course). When was the last time you heard a Disney prince belting his heart out about his feelings? (And can you imagine what an incredible role model Kristoff is for young boys watching Frozen 2 for going for it like that?!)

Following the first Frozen movie, it was no secret that fans felt sort of ripped off that Kristoff’s character, voiced by Jonathan Groff, never really had his own song. Back in 2013, we had to savor the short duet he shared with Sven, so seeing his character not only have the pleasure of singing one of the best songs in the sequel, but also watching him go through something so meaningful is really what we’ve all been hoping for.

Okay, but can we talk about how Kristoff sang a power ballad about his feelings, told Anna that his love isn’t fragile, AND asked Anna what she needed during battle and didn’t tell her to step aside so he could protect her. I love it all so much❤️? #Frozen2 pic.twitter.com/5zOTCYC4WI

The cast of Frozen 2 shares our sentiments on the empowering feminist attitude of Kristoff’s character and we are here for all of it. In an interview with Jimmy Fallon Kristen Bell shared one her favorite lines in the film: “There’s one moment where Anna is in distress and he swoops in and picks her up,” Bell explains, “It’s in the midst of battle, right. He doesn’t say ‘I’ve got you’ and start taking over. He swoops her up and very quickly looks at her and he says, ‘I’m here. What do you need?’ It’s mind blowing.”

frozen 2 literally gave kristoff a whole power ballad about his feelings? like they rlly did That

Regardless of everyone’s opinions on Frozen 2 as a whole, Kristoff’s character development has been met with overwhelmingly positive reactions by fans, and we’re thrilled to see such an incredible role model paving the way for future Disney princes.

If you’ve seen Frozen 2 yet, what did you think of the direction the writers took with Kristoff’s character? Have a favorite moment of his from the film? Let us know in the comments!