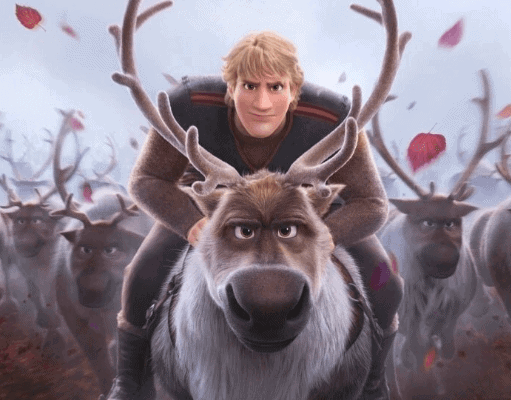 Spoiler warning: This article share’s details about the plot and music of the Frozen sequel, specifically regarding Kristoff’s new song in Frozen 2.

Frozen 2 has so much to offer fans: an epic adventure story, answers to our most pressing questions, fantastic character development, music that’s arguably better than the first film. And yes, what many fans hoped and pleaded for, a solo song for Kristoff. But while Kristoff’s new song shares his love and devotion to Anna, it’s also an anthem that challenges toxic masculinity.

During the Frozen 2 press conference in Hollywood, the team behind the film — including the actors and directors as well as songwriters Bobby Lopez and Kristen Anderson-Lopez — discussed what it was like to give Jonathan Groff, voice of Kristoff, his own full-length song in the Frozen sequel, and how it came to be.

“That was my one criticism of the first one. I was like, look, it’s an excellent film. But Jonathan Groff doesn’t sing so THAT’S how it fails,” shared Kristen Bell, who plays Anna. “This time, everybody knew what to do. And Jonathan has, dare I say, I mean it’s very difficult to describe and I don’t want to blow it, but it is one of the best — it’s one of the top three moments of the film.”

The voice of Olaf, Josh Gad, added of Kristoff’s new song in Frozen 2, “I think it’s the funniest song in Disney Animation history.”

“It was such an amazing experience,” Groff shared. “Bobby and Kristen had said to me at the beginning, as well as Jen and Chris, ‘You know, we want Kristoff to have a song.’ And I thought that’s so sweet of them to say, but how does a mountain main break into song? I’d so much rather hear Idina sing an eighth ballad.”

And a ballad Groff got. The actor and performer sings a powerful, ’80s-rock-inspired anthem during a moment in the film where he is particularly vulnerable. He wants to be able to express himself to Anna but he’s having trouble doing so, and so he sings a song in the middle of the Enchanted Forest to let all his feelings out. We won’t share any more details regarding when or why exactly this song takes place, but take it from us when we say that it is by far one of the most entertaining, hilarious, but still meaningful parts of the film.

The discussion of Groff’s new song led into a deeper discussion of Kristoff as a character. And even though Frozen 2 is a film about two sisters, Kristoff’s character is able to represent men in fairy tales and media in a refreshing and vulnerable way.

“We talk about female empowerment that’s led by two women [in Frozen 2], but I personally think that the representation that Jonathan gives for the guys is out of this world, and it’s so subliminal that I don’t even know if people will pick up on it,” said Bell. She continued, “There’s one moment where Anna is in distress, and he swoops in and picks her up…he doesn’t say ‘I’ve got you’ and start taking over — he swoops her up and very quickly looks at her and says ‘I’m here. What do you need?'”

Bell also refers to a pivotal moment in the film in which Anna apologizes to Kristoff and he replies, “My love is not fragile,” an example of Kristoff’s love being completely egoless.

To sum it up, songwriter Kristen Anderson-Lopez shared her take on why Kristoff as a character in the Frozen franchise is so important and powerful, but in a different way than men are often represented in film.

“When magical fantasy Sven says, ‘You feel what you feel and your feelings are real,’ I think if that one message comes across to boys, that the boys get to feel empowered, to feel their feelings in a big, or small, but hopefully big, ’80s power ballad kind of way — that we’ve done a little bit in the war against toxic masculinity.”

And after seeing the film for ourselves and hearing Kristoff’s epic song, we definitely agree.

Frozen 2 hits theaters on November 22. So much more is revealed in the film, which tells of the remarkable journey, intimate moments, dark secrets, and overall enchanting tale that takes the Frozen story and the characters we all know and love to an entirely new level. Fans of the original movie will love to take this new Frozen adventure in the sequel just as much as the cast and team enjoyed creating it themselves. Frozen 2 isn’t your typical princess story, and that becomes very clear in this film.

Are you happy Kristoff gets a new song in Frozen 2? Let us know in the comments!