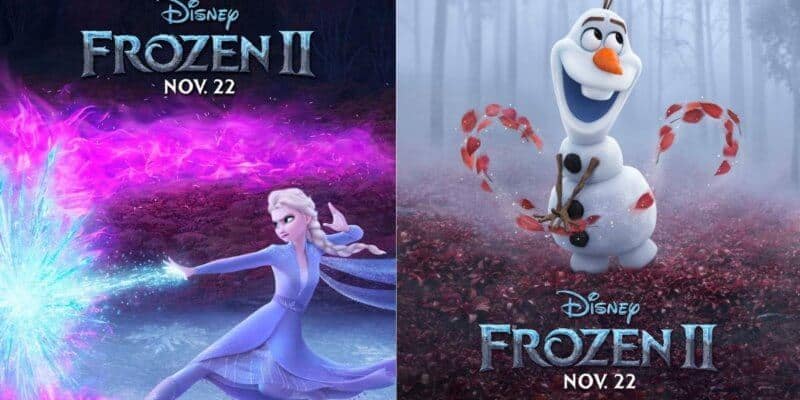 Are you ready to see Queen Elsa and Princess Anna return to the big screen in the highly anticipated sequel, Frozen 2, next month? I know I am, and what’s getting me even more excited is the teasers Disney has been releasing.

The first of brand new Frozen 2 posters features the beloved Queen Elsa. This poster showcases Elsa’s personality and her magical powers perfectly and is filled with bright, bold colors — just like the Queen herself.

Elsa is one of the most developed characters in Disney history. She starts off secluded and a little shy since she had to stay away from everyone thanks to her magical powers. But as time progresses, you can see her true personality emerge and how she grows. She becomes an independent, strong, beautiful woman and that is exactly what you see in the new Frozen 2 poster.

Queen Elsa also reveled a new look in the official trailer for the highly anticipated sequel, Frozen 2, which you can watch here.

As you can see, Olaf, of course, is absolutely loving the ride but you can see the concern and fear in Anna’s face. Is this foreshadowing something in upcoming sequel, Frozen 2?

Part of what makes Frozen such a great film is the fact that Olaf makes for a great sidekick. He brings a smile to everyone’s faces and always looks on the bright side (even if he doesn’t always realize it).

Just look at how happy Olaf is in this brand new Frozen 2 character poster. He always reminds us it’s the little and simple things in life that we should look forward to.

And of course, it wouldn’t be Frozen without everyone’s favorite duo — Kristoff and his reindeer Sven. This iconic duo doesn’t let anything come between them. They are both determined and strong and they compliment each other quite well.

We still have about one month until the sequel hits theaters, but Disney fans already know that Idina Menzel, Kristen Bell, Josh Gad, and Jonathan Groff will all return to voice their recognizable Frozen characters.

Frozen 2 fans can also look forward to meeting brand new Frozen characters in this sequel. Evan Rachel Wood will voice Elsa and Anna’s mother, and Sterling K. Brown will voice Lieutenant Mattias, who Elsa and Anna will encounter in the enchanted forest.

Frozen 2 fans can also look forward to another iconic Queen Elsa song in the sequel. As I’m sure everyone remembers, in the first Frozen film, Elsa belts out “Let It Go” as she expresses her feelings and magical powers. And in Frozen 2, Elsa will sing “Into the Unknown,” which is a new song Frozen fans will love. “Into the Unknown” will be about Elsa and how she has to learn to cope with this voice that continues to call her away from her family.

Are you excited to see Frozen 2 next month? Let us know in the comments.