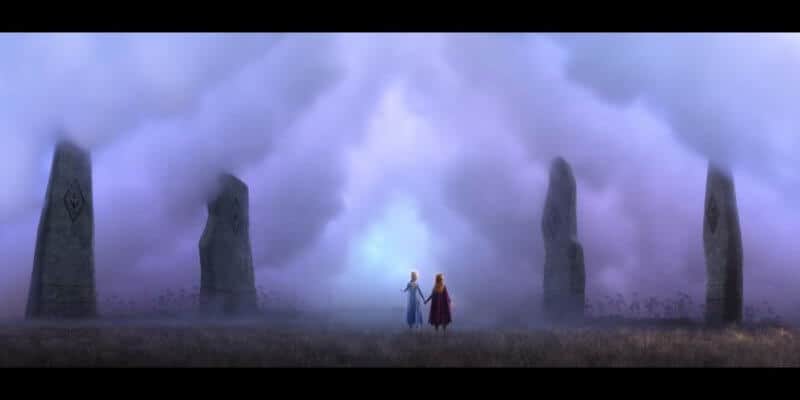 Spoiler warning: This article references the plot and enchanted forest setting of “Frozen 2.” If you’re looking for some background information before you see the movie, keep reading. But if you want to watch “Frozen 2” without the possibility of any spoilers, feel free to return to our homepage and read our other awesome content on Inside the Magic.

“Frozen 2” looks like the most epic Disney sequel — and possibly the most epic film from Walt Disney Animation Studios — that we’ll ever see. And since it has to follow in the footsteps of the wildly successful first “Frozen” movie, we’re not surprised that Disney is coming out with a movie that’s sure to enchant everyone who watches it. But there’s one element of this film that fans can’t quite figure out yet: what is the enchanted forest?

After attending the early press day for “Frozen 2” at Walt Disney Studios, studying the film trailers, and trying to wrap our brains around the enchanted forest, we finally feel equipped to explain this new magical world within the “Frozen” sequel.

In order to understand the enchanted forest, we first have to go back in time to when Anna and Elsa were children and how they first learned of the forest’s existence. In the beginning of “Frozen 2,” we see young princesses Anna and Elsa getting ready for bed with their parents, King Agnarr and Queen Iduna.

“Far away, as north as we can go, once stood an enchanted forest,” he said. “It was a magical place, but something went wrong. Since then, no one can get in or out.”

King Agnarr visited the forest as a child, and he shares that it was ruled by four magical spirits of nature: fire, water, earth, and air. Those spirits can be both enchanting and dangerous, and when he visited this strange setting, something went terribly wrong: the spirits became enraged. King Agnarr doesn’t know who saved him that day or how he escaped, but he does know one thing. A haunting voice cried out, a magical mist enveloped the forest, and everyone was locked out.

Per King Agnarr’s story, the forest may one day wake again. And according to Elsa’s new song “Into the Unknown,” it seems like that same haunting voice is now calling her to visit the forest, too.

Of course, if you’ve seen the trailers for “Frozen 2,” you know that Elsa was able to get herself, Anna, Kristoff, Sven, and Olaf through the mist and into the enchanted forest.

But what is the forest? Well, like the other major settings of the “Frozen” sequel, it’s incredibly beautiful, visually stunning, and wonderfully animated. It’s filled with autumnal foliage as you can see in the trailer and images Disney has released, but it’s underscored in magic.

“It is a beautiful place that’s entirely surrounded by a wall of mist,” says production designer Michael Giaimo. “There are people there who’ve been trapped for decades. We differentiate what fall looks like inside the enchanted forest versus outside—there are no blue skies in the enchanted forest. And since there is a wall of mist, there are deep layers of atmosphere that are filled with mystery.”

Interestingly, when Elsa, Anna, Kristoff, Sven, and Olaf visit the forest, the people who have been trapped there are very confused and wonder two things: how they got inside and where Elsa learned magic. Lucky for all of us fans, we’ll get to learn the answer to those questions one the movie debuts.

Is the forest enchanted?

One of the questions that came up both during the “Frozen 2” early press day and every time we’ve seen a new trailer from the sequel is whether or not the forest is really enchanted. After learning more and more about the “enchanted forest” at the press day and reading up on the characters in the film, what we’ve come to understand is that it may not be the forest that’s inherently enchanted, but it is the inhabitants and everything that is happening within the forest that makes it enchanted.

We know from what Disney has revealed so far that there are some amazing new creatures we’ll meet in “Frozen 2.” One is the Nokk, a mythical water spirit who takes the shape of a horse — Elsa meets the Nokk in the sea, as seen in the trailers. But the other three creatures are found within the forest: Gale the wind spirit, Bruni the Salamander, and the Earth Giants made of rock.

The mist is another part of the forest that’s enchanted: it’s a conceit and a very important element of the “Frozen 2” story as a whole. While we know that the mist kept the people trapped inside the forest stuck in time, and it’s kept outsiders from entering, we also know that Elsa was able to enter it no problem, and she could bring her family in without a problem.

What do you think of the new enchanted forest in “Frozen2”? Share your take with us in the comments!