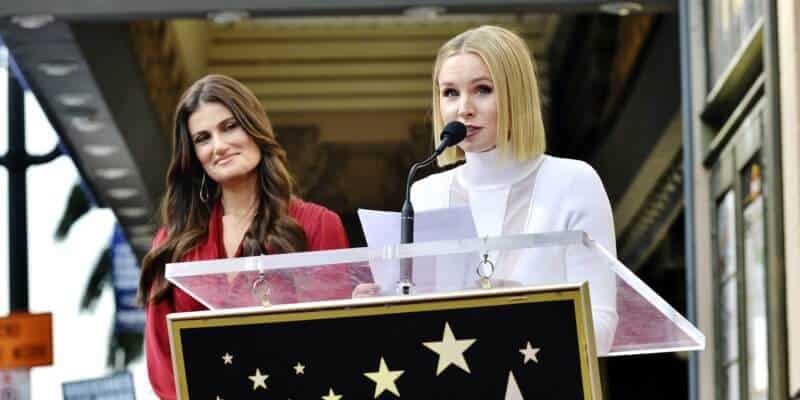 Frozen 2 stars Kristen Bell and Idina Menzel received stars together in a shared ceremony on the Hollywood Walk of Fame.

Bell and Menzel have been extremely busy promoting the highly anticipated Frozen 2 sequel, which opens this weekend. However, they took a break from their busy schedule to attend the ceremony in Los Angeles as they each were honored with a star on the Hollywood Walk of Fame.

Bell was surprised she would be getting her own star. She shared in an interview: “… I thought we were going to be in the same star, up until I saw that there were two stars on the ground, and I was so thrilled with that!” To which Menzel replied: “… you were? That’s so generous of you! I would’ve been like, give me my own!”. We love seeing the stars share these moments where their camaraderie is so genuine and evident, both on and off the screen.

Bell is known for her sense of humor. Other projects like NBC’s  “The Good Place” and “A Bad Moms Christmas” have allowed her to utilize those comedic skills on set. So it’s no surprise that her speech during the ceremony was witty and laced with a bit of raunchy humor.

“This star will really only know it’s true value when inevitably someone is mugged in that very spot. And as they clutch their purse, the assailant screams: ‘LET IT GO!’ And the victim looks up and say: ‘That’s not even her song, you son of a [expletive]! Only then will I know that I’ve truly made it!”

Menzel reminisced of all the years and hard work that got her this far. She shared in an interview: “When I was 15, I had a trip here with my friends, a summer touring trip, and I took a picture next to Barbra Streisand’s star so it obviously means a lot,” she said.

Idina also took to social media to share pictures of the momentous occasion. In the post caption, she wrote: “She’s a star ?Star #2,682 to be precise. #overthemoon”

During the ceremony, a group of protesters showed up to disrupt the festivities. But the stars took it in stride and as they say in Hollywood, the show must go on. And so, it did!

You can watch the live stream of the ceremony here:

Are you planning on watching our beloved Frozen sisters this weekend when Frozen 2 hits the big screen? We can’t wait to see them journey into the unknown and share the adventure together!