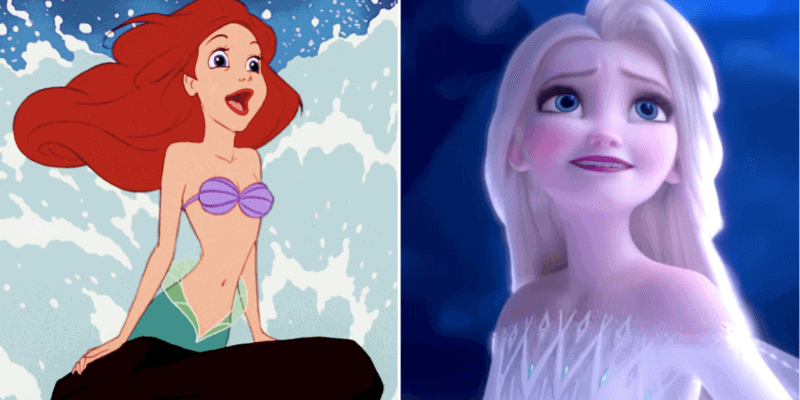 Even though Frozen‘s Anna and Elsa aren’t official Disney Princesses, you would be hard-pressed to find a fan of the Frozen franchise who doesn’t also love Princess Snow White, Princess Cinderella, Princess Aurora, Princess Ariel, Princess Belle, and all of their friends.

The team at Walt Disney Animation Studios knows their audience and, when Frozen 2 released in November 2019, they gave Disney Princess fans a very special — and very unexpected — cameo appearance.

The Little Mermaid shows up in one scene of the second Frozen movie, but probably not how you expect! A recent Instagram post explains:

“In Frozen 2 (2019), when Elsa is walking through the memories of the past, she sees her parents as youth. Her mother asks what her father is reading, he says “Just some new Danish author”, implying Hans Christian Andersen. The cover of the book features a silhouette of the Little Mermaid.”

The post’s caption notes that Andersen also wrote “The Snow Queen,” which is the tale the first Frozen movie was loosely inspired by. This fun literary reference — and the famous silhouette of Ariel sitting on her rock — is an easy Easter egg to miss because it happens so quickly, but make sure you watch for it next time you watch Frozen 2!

The specific image of Ariel that was used on the book cover in Frozen 2 is the same graphic that was used for a number of promotional products ahead of the release of Disney’s The Little Mermaid (1989), so it’s certainly familiar to Disney fans of all ages. Once you know what to look for, you can’t miss Ariel’s Frozen 2 cameo appearance!

Even though almost all Disney animation fans love the animated version of The Little Mermaid, there is also major excitement surrounding the upcoming live-action adaptation of the classic fairy tale story.

The stellar cast includes Halle Bailey as Ariel, Jonah Hauer-King as Prince Eric, Javier Bardem as King Triton, Melissa McCarthy as Ursula, Daveed Diggs as the voice of Sebastian, and Awkwafina as the voice of Scuttle.

The score for the upcoming Disney live-action movie has been completed and was composed by Lin Manuel-Miranda (Hamilton, Mary Poppins Returns) and Disney Legend Alan Menken.

Although The Little Mermaid faced numerous production delays amid the pandemic, reports indicate that filming is now underway. According to IMDb, the Rob Marshall-directed movie does not have an official release date at this time. It is also unknown if the film will debut in theaters, as a Disney+ streaming exclusive, or simultaneously on Disney+ Premier Access and as a theatrical release.

Will there be a Frozen 3?

Although filmmakers have not confirmed whether or not there will be a third feature film added to the Frozen series, the popularity of both the first and second movies makes Frozen 3 seem likely.

In 2019, director Jennifer Lee indicated there is potential for more installments in the Frozen saga. Lee did not, however, provide details regarding whether pre-production work has actually begun on future movies.

At this time, none of the core cast of the Frozen movies — Kristen Bell (Anna), Idina Menzel (Elsa), Josh Gad (Olaf the snowman), Jonathan Groff (Kristoff) — have indicated they would be unwilling to return for a third adventure in Arendelle or the Enchanted Forest.

Do you hope there’s a Frozen 3? Did you know about Ariel’s Frozen 2 cameo appearance? Tell us what other Disney Easter eggs you love in the comments!