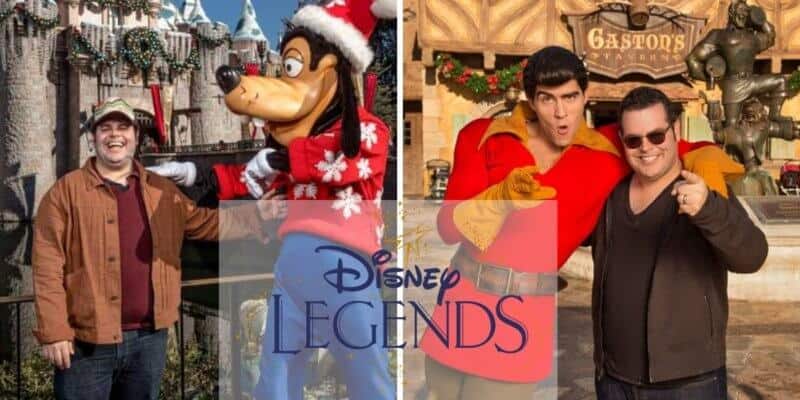 We all know him. We all love him. He is the iconic voice of our favorite little snowman, Olaf. That’s right, I am referring to the one and only Josh Gad.

But just how great is Josh Gad? Well, the Frozen actor has perhaps the most iconic voice in Disney history (I mean, the second he speaks, you just know it’s Olaf). He has also portrayed other roles in Disney films, he has gone out of his way to surprise fans and Disney World Guests, and he has even reached into his own pockets to help out Disney Cast Members — and he is probably the biggest Disney fan out there. So, I am going to make a bold statement and say that Josh Gas IS a Disney Legend before even being named a Disney Legend.

Need a bit more convincing? Well, let’s dive in a bit deeper and find out exactly why Josh Gad is a Disney Legend before being officially named a Disney Legend by The Walt Disney Company at D23 Expo.

As I mentioned above, Josh Gad has one of the most — if not the most — iconic voices in Disney history. Even when Gad is appearing on interviews or in other roles, the second he opens up his mouth and begins to talk, you instantly hear the lovable snowman from Frozen and Frozen 2, Olaf.

But what makes Josh Gad so incredibly good at voiceovers is just how passionate he is. During a press conference for the Disney+ short Once Upon A Snowman, the Frozen filmmakers gave some inside information and shared fun stories about working with Gad.

Josh Gad is, of course, known for his humor, his warm heart, and his improv. So, when the filmmakers were asked if Gad improvised any lines for the upcoming short, Director and Writer Trent Correy explained how the writers all put their heads together for the script, but Josh Gad is just as funny in person as he is on social media and so of course, he had to put his own spin on things.

“He is hilarious,” Correy said during the press conference. “In fact, Dan and I were in the recording booth with him, not behind glass. And I think the hardest part about that was just trying not to laugh so we didn’t mess up the take. I was covering my mouth most of the time, just spitting while Josh just having a blast. But he is so generous with his time. He came in right after Frozen 2 to record this with us. He gives you so much as an actor and a comedian. I just love working with him.”

Gad is clearly dedicated to his work and really gives his all to each and every project he works on. He won’t settle for anything less than perfect and he really knows how to bring his own personality to the table each and every time.

He Does More Than Voiceovers

Even though Gad is known for the iconic voice of Olaf, he does so much more than that. He has starred in the live-action version of Beauty and the Beast as Gaston’s sidekick, Lefou, and has even appeared on both Disney Family Singalong specials on ABC in 2020.

He is also gearing up to star in the newly announced spin-off of the live-action version of Beauty and the Beast, which will focus on Gaston’s backstory.

If there’s anything Josh Gad loves to do, it’s surprising Disney fanatics. From Frozen fans at movie theaters to Disney World Guests to healthcare hero’s, this Disney actor definitely admires his fanbase and loves to give them all a great surprise, just to make someone’s day. Here are just a few times Gad went out of his way to surprise his fans.

Back in 2014, Frozen fans were able to watch a special sing-a-long version of Disney’s hit animated film, Frozen. One of those theaters included El Capitan Theater in Hollywood, CA, where Josh Gad made a special appearance, surprising fans.

Be Our Guest Restaurant

Back in 2017, on the same day that the live-action adaptation of Beauty and the Beast released in theaters, Guests who were dining at Walt Disney World’s Be Our Guest Restaurant got a huge surprise when Josh Gad, known for playing LeFou in the film, showed up to entertain.

Guests were enjoying their meals when all of a sudden, they heard a familiar voice come over the loudspeaker, which recited Lumiere’s memorable introduction to the iconic song “Be Our Guest.” Gad then walked into the dining room to reveal himself and it’s safe to say, the Guests were in shock.

You can read the full story and watch the video here.

Disney World Guests who were lucky enough to be attending the Frozen Sing-Along attraction on December 3, 2020, were in for a special treat as Gad surprised the audiences when he walked out on stage to talk to the crowd a bit. He then went on to show off his wonderful voice and burst out into song, singing Summer from the first Frozen film.

Good Morning America honored several different healthcare heroes throughout the United States during the global pandemic, and during one of the spotlights, the Disney and Frozen actor made a special appearance and surprised a healthcare worker’s daughter.

The mother, Ashley, helped to find Pittsburgh’s first COVID testing unit. She did not have a day off since the pandemic began to really hit the U.S. in February 2020, and this, as you can imagine, was extremely difficult on her 7-year-old daughter. That’s where Josh Gad came into play.

Good Morning America’s T.J. Holmes stated, “It’s good that we know Olaf!” and that’s when Gad appeared virtually from his home. Gad showed the daughter some of his Olaf collectibles and you could tell, he made this little girl’s day. You can watch the full interview here.

2020 was a rough year for so many, including the Disney community, which was hit with the tragic news of tens of thousands of Cast Members being laid off. So many people chipped in to try and help out these Cast Members, including the voice of our favorite snowman.

Josh Gad announced he was donating to the thousands of Disney Parks employees who were laid off during these times and asked if possible, for as many of his fans to join him.

Inside the Magic continues to send our thoughts to all of the Disney Cast Members who have been affected by the layoffs. If you are looking for ways to help these Cast Members, check out our resource article here.

"Samantha? dad hat by me & Kristen Bell. If you don't get the joke, hat’s probably not for you. All proceeds go to No Kid Hungry and Color of Change. Please also check out these orgs & consider donating to @nokidhungry & @ColorOfChange – https://t.co/y5d1Vhs5LI pic.twitter.com/3UKCb5fMtv

Josh Gad and Kristen Bell, the voice of Anna, designed adorable hats with the word “Samantha?” on them in honor of Olaf’s famous line from Frozen 2. However, they didn’t just create these for fun. No, they created them and are selling them, and the proceeds went to two great charities — No Kid Hungry and Color of Change.

It’s clear that Josh Gad is more than just a Disney actor; he is a true fan. Gad grew up in Hollywood, Florida, and has stated on multiple occasions that he and his family would visit Walt Disney World Resort on a regular basis when he was younger. He literally grew up in a Disney family, loving Disney, and so when he landed a job working with the company, it was a dream come true for him.

He loves the parks, the fans, the Guests, the Cast Members, the movies, and the company as a whole. Gad is a true Disney fan.

Editor’s Note: The opinions in this article do not necessarily reflect those of Inside the Magic as a whole.