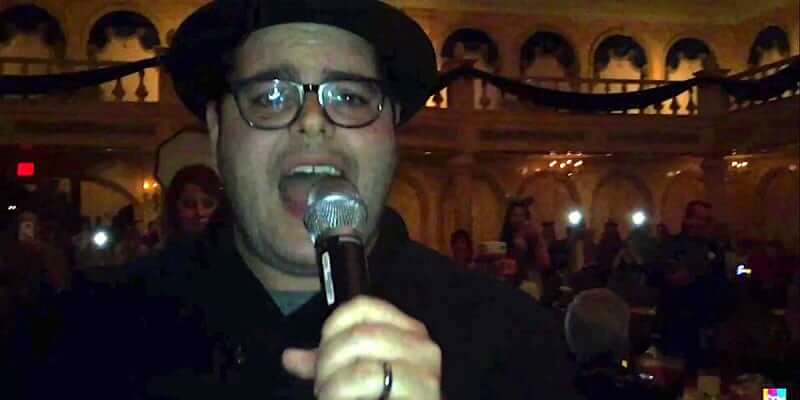 On the day that the live-action adaptation of “Beauty and the Beast” released in theaters, guests dining at Walt Disney World’s Be Our Guest Restaurant got a big surprise when LeFou (actor Josh Gad) showed up to entertain. It started with a mysterious and yet familiar voice being broadcast across the restaurant, reciting Lumiere’s memorable introduction to the song, “Be Our Guest.” Diners looked around curiously in a sense of anticipation, unaware of what they were about to see. The mystery quickly transformed into an enchanted party with a few squeals and many shocked expressions once Gad emerged from the dark and revealed himself.

The “Beauty and the Beast” star (and voice of Olaf in “Frozen”) sang his way into the restaurant with a splashy entrance before addressing the crowd of adoring fans. One princess in the crowd was even treated to a brief ballroom dance with Gad as her partner. Gad was every bit as charming as a prince and never betrayed for a moment that he played a fool in the new film.

Inside the Magic was in attendance for this special appearance and enchanting meal. Lumiere led the way as we took our seats in an elegant ballroom straight from the animated classic. As many of you know, the coveted Rose Cup is now available for purchase at the Be Our Guest Restaurant in Walt Disney World. Featuring a glowing rose in the center of a dome-shaped tumbler, the cup is a clever souvenir for “Beauty and the Beast” fans. It can be bought for $9 at breakfast and $13 at lunch and dinner. While we were there, we had to get our hands on it. When in France…. With it being the same day as the release of the live-action adaptation “Beauty and the Beast,” the kitchen in Be Our Guest Restaurant had prepared a couple special desserts in celebration of the debut. The Tale As Old As Time specialty dessert (a delicious combination of white mousse, “grey stuff,” chocolate beads, whipped cream and a chocolate spiral) and lemon meringue cupcake were available in a limited number. In fact, 300 were made for the day. Unsurprisingly, the desserts were widely popular with guests and then sold out that evening. It was such an incredible experience to dine in this enchanted castle. The entire meal was elegant from start to finish, and bringing in Josh Gad to show love to Disney’s guests was a truly special moment. Once again, Disney made magic for its park guests in a way that was unforgettable.