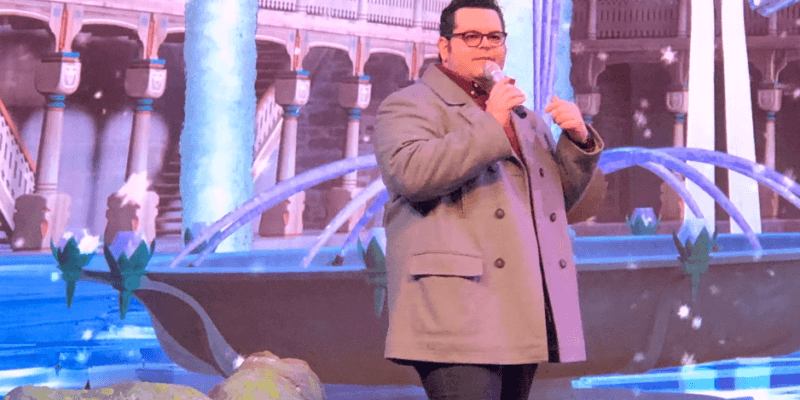 We all know and love him as the voice of our favorite little snowman, Olaf. That’s right, I am referring to the one and only Josh Gad! And now, we have even more reason to love the actor. Why?

Well, because he made a surprise appearance at the Frozen Sing-Along attraction in Disney’s Hollywood Studios at Walt Disney World.

Disney guests who were lucky enough to be attending the Frozen Sing-Along attraction earlier today, December 3, were in for a special treat. Gad walked out on stage to talk to the crowd a bit, but he also showed off his wonderful voice as he burst out into song, singing Summer from the first Frozen film.

Josh Gad proved to the audience that he really can sing as he belted out and showed off those vocals.

So this just happened! Surprise appearance by @joshgad at #HollywoodStudios @DisneyFrozen Sing-Along. He can sang for realz! Amazing pipes! #Respect pic.twitter.com/NBP8OP5xx3

Not long after Josh Gad made his surprise appearance at the Frozen Sing-Along attraction in Disney’s Hollywood Studios, he posted on his personal Twitter account announcing that he was “Going to Disney World!” thanks to Frozen 2 being number one in the world for two weeks.

Now that “Frozen 2” is number one in the world two weeks over, people keep asking me how I’m celebrating. I’ve always wanted to do this next part: “I’m going to Disney World!” Somehow it doesn’t work nearly as well when you haven’t won a Super Bowl. pic.twitter.com/Tf8m5NQwG6

Frozen 2 has been taking the box office by storm, setting records left and right. It earned a total of $127 Million on its opening day, and on Thanksgiving Day alone, it grossed $14.718 million.

Frozen 2 also topped the Black Friday box office with a total of $34 million and earned $202 million its first week in theaters.

Before Frozen 2 even hit theaters, it broke records on Atom Tickets and Fandango. On its first day of advanced ticket sales, the highly anticipated sequel sold more tickets than any other animated feature in history.

If the Disney sequel maintains these record-breaking sales, which it is projected to do, it is estimated to earn $556 million worldwide, meaning it’s basically already Walt Disney Animation’s largest-grossing theatrical sequel.

Were you one of the lucky ones to see Josh Gad in Disney’s Hollywood Studios? Let us know in the comments.