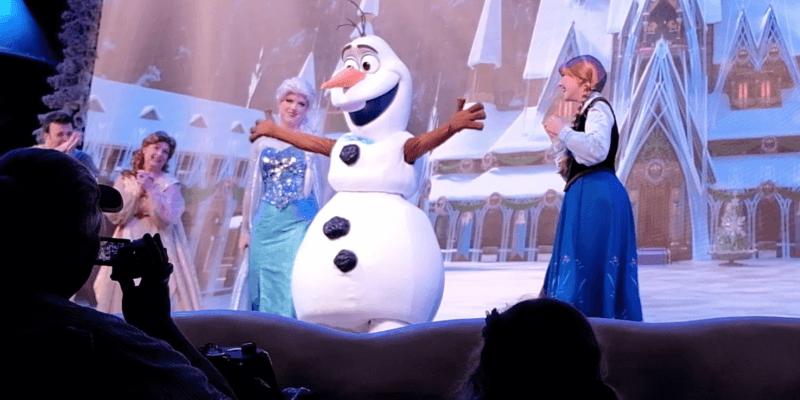 In celebration of Flurry of Fun and the Christmas season, Disney’s Hollywood Studios attraction For The First Time In Forever: A Frozen Sing-Along Celebration has received a special holiday finale!

For the First Time in Forever: A Frozen Sing-Along Celebration first debuted at Disney’s Hollywood Studios back in July of 2014 and was a massive hit in the park. The popular attraction features scenes and songs from the Pixar/Walt Disney Pictures Box office hit “Frozen.”

What is so special about the attraction is that guests to the experience are encouraged to sing along to the film’s music as massive monitors display the musical scenes from the film with the lyrics to the songs along the bottom of the screen. For “Frozen” fans there is no better way to celebrate the holiday then by seeing this new edition to a beloved experience. The show still runs at the Hyperion Theater with Anna, Elsa and Kristoff, but now these friends welcome Olaf to be a part of the sing-along. In the new holiday edition of the show three new songs from the upcoming “Frozen” short airing before Pixar’s “Coco” are now included with new dance numbers.

This new special holiday edition of For the First Time in Forever: A Frozen Sing-Along Celebration is now playing at Disney’s Hollywood Studios.

Comments Off on VIDEO: Frozen Sing-Along show at Disney’s Hollywood Studios gets a NEW Holiday Finale