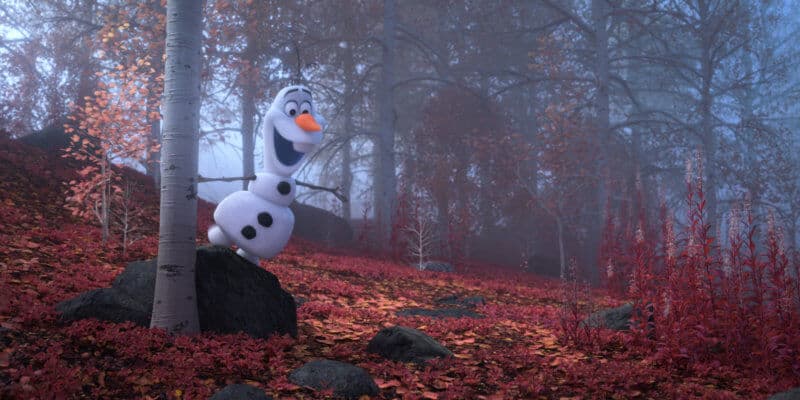 Not everyone is comfortable with change, especially not Olaf, everyone’s favorite happy snowman. But in Frozen 2, Olaf works on becoming comfortable with growth and change, something that actor Josh Gad shares is truly special about his character.

In the Frozen sequel, it becomes very clear within the first few minutes of the film that Olaf’s character has matured tremendously. In the first Frozen film, Olaf has the persona of a naive toddler. He’s full of wonder and happiness, and while he shares a few lines of truth — like the iconic and always memorable “Some people are worth melting for” — he also doesn’t realize that as a snowman he’ll melt in the summertime.

But in Frozen 2, Olaf has matured. The film is set three years after the first one, and Olaf, with his new permafrost, is just realizing the concept of change. He presents this very real feeling of concern with everyone around him getting older, just like when kids finally realize that everyone eventually grows up.

We won’t spoil the film for you, but Frozen 2 has an underlying theme of responding to and becoming comfortable with changing, because difficult changes in life can often bring about personal growth and triumph. And during the Frozen 2 press conference in Hollywood, Josh Gad, voice of Olaf, spoke about the importance of Olaf‘s maturity in Frozen 2 and how his character is truly relatable to not only children but viewers of all ages.

Gad shared that years ago when the team had begun production on the film, his oldest daughter, Ava, was about five years old.

“One day we’re sitting at the table and she was laughing. And all of a sudden tears started streaming down her face, and she looked at me and my wife and she goes, ‘What if I don’t want to grow up?’ And she started crying,” Gad said. “It was so unbelievable because I think we’ve all had that experience as kids but it’s so traumatic we just forget about it … But that is the way I feel about Olaf in this movie.”

Gad continued, “In the first movie, [Olaf] was this innocent ball of naivete who was willing to basically go out into the summer sun because he didn’t know any better and embrace it. And in this movie, he’s almost gone from toddler to fully-grown child, where now he’s starting to ask those questions that don’t always have easy answers. And both from a comedic perspective it gave me so much to play with. But more importantly from an emotional arc it was such a beautiful journey of, you know, that moment in life when you start to realize that maybe the world isn’t just raindrops and lollipops and roses, whatever that lyric is. But that is such a beautiful thing to play.”

The Frozen 2 cast and team nodded in agreement on stage as Gad told this very relatable story of his daughter realizing that one day everyone grows up. And just like Gad’s daughter, Ava, Olaf in Frozen 2 has finally realized that eventually things in life have to change.

But that’s why Olaf is such a wonderful character. He provides comedic relief of course, but he also represents the conflicting feeling that so many of us have felt (and still feel) when we think about growing and changing. Just as Olaf recognizes, change isn’t always comfortable. But as you’ll learn in Frozen 2 — especially after you hear the music from the film, including new songs like “Some Things Never Change” and “When I Am Older” — this movie deals with the positives that can come out of growing and changing. And that’s truly remarkable.

Are you excited to see Olaf’s character development in Frozen 2? Let us know in the comments!