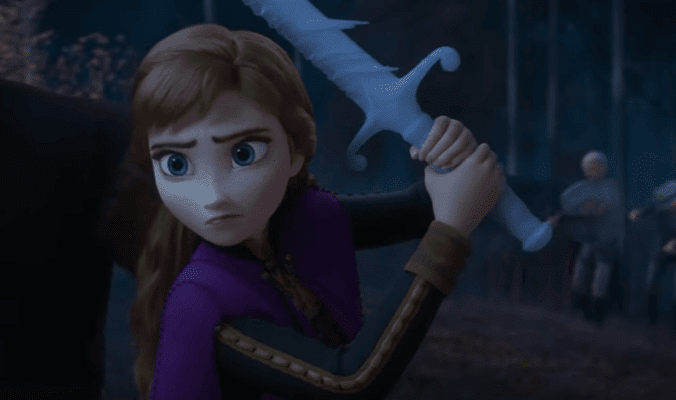 Frozen 2  is a film that deals with themes of fairy tale and myth, of self-discovery and learning from the past. It shows audiences how change can be scary yet good, and that expressing yourself and figuring out who you are and what you want out of life is challenging but still healthy and necessary. But after seeing the trailers of the new sequel film, many were concerned about one thing that seemed pretty apparent: Frozen 2 is a darker Disney sequel that fans of the first one might not be ready for.

To catch you up, Frozen 2 tells the story of Elsa and Anna who take a remarkable journey with Kristoff, Sven, and Olaf to the Enchanted Forest. They ultimately uncover a past they never knew was reality and learn things about themselves that they never knew were deep inside them all along. It’s a story of fairy tale and myth, of challenge and triumph, but it also deals with heavier topics like the journey to self-discovery, how to rise above when faced with trauma, and what to do when you don’t know what to do.

During the Frozen 2 press conference in Hollywood, one member of the audience shared that she, as a mother of two, is afraid that the Frozen sequel might be too dark for her young girls. And even though parents are fully allowed to be concerned about what their children watch, the team behind  Frozen 2 stated why they believe it’s a good thing for this Disney film to be darker than its predecessor.

Writer and director Jennifer Lee added, “Sometimes we forget, if you go back to old, traditional fairy tales, they always have a moment that gets a little scary. And that’s part of what fairy tales are for. There’s so that you as a child and as a person in your life can experience things and you’re safely in the seat. And that helps you cope with life. And I think those are really important, and kids reach out. So I think we didn’t go into the characters being full of fear and violence in that way. We went to those things we knew that are provocative and mythic and fairy tale.”

Finally, Kristen Bell, the voice of Anna in the Frozen franchise and a mother herself, shared her response to those who have raised some concerns about whether the second Frozen film is intended for children as young as the ones who enjoyed the first movie. She put it so poignantly: yes, Frozen 2 is darker, but we don’t give children enough credit to be able to understand what we believe to be “darker” themes and emotions.

“I have two little girls too, and I know exactly the feeling that you’re talking about,” said Bell to the concerned mother and perhaps other concerned parents in the audience. “And the more I thought about it, and then having shown it to them a few weeks ago, I really think that we’re always asked, ‘Why do you think the first one hit?’ I think my conclusion is, we don’t give kids enough credit — because they’re projections of us and we want them to be happy because we want ourselves to be happy all the time. We don’t give them enough credit for their ability to digest complex situations and trauma and struggle.”

Bell continued, motioning to Idina Menzel and referring to the actress’s character, Elsa, “And I think that’s why the first one hit because this character identified in kids, What do you do when you feel two different things, when you feel shy and vulnerable and incredibly powerful? And I think in this second one, that’s the power of story. You don’t have to tell them that the world is a scary place even though it really is. But you can let them see a story that has a resolution…I actually think that it’s great for kids to be a little bit on the edge of their seat because it’s a safe environment to try on those emotions.”

Yes, it’s true that the trailers for Frozen 2 can lead fans of the first movie to believe that this sequel might be much darker than the original. But just as Lee put it, fairy tales deal with challenges: they deal with death, trauma, sacrifice, and struggle. But they also tell stories of hope, resilience, and triumph. And what better way to allow kids to experience an emotional journey than in the safest environment of all, an animated Disney film?

Frozen 2 hits theaters on November 22. And like the team behind the movie, we’re confident that audiences of all ages will love the movie as much as they did the first one.

Are you excited to see the enchanted and magical yet challenging journey that some of our favorite Disney characters go through in Frozen 2? Let us know in the comments!