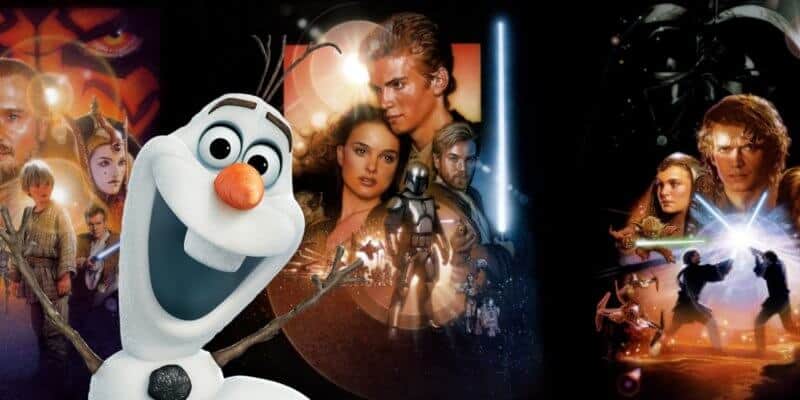 Ladies and gentleman, droids and Ewoks…our favorite snowman has done it again! Josh Gad, who plays Olaf in Frozen and Frozen 2, promised to recap the Star Wars franchise if 10,000 people retweeted his message to #VOTE.

The internet quickly sprang into action to make this dream — and, may I say, masterpiece — become a reality. Within the hour, Josh racked up 10,000 retweets and Olaf had a job to do. Because the Star Wars saga is so long, Olaf decided that this would be part 1 (of likely 3). In today’s installment, the beloved snowman recaps the prequel films — which Kanye West enjoys and the rest of us…not so much.

In case you are confused as to why Olaf would recap movie plots, this stems from his instantly iconic and hilarious monologue in Frozen 2 where he recaps Frozen in the most dramatic way possible. Gad originally gave us a taste of his movie recapping skills when 1,500 Americans showed him that they had registered to vote. Following that milestone, he told the story of Avengers: Endgame and it’s better than you can imagine.

Josh did not disappoint on his Star Wars retelling and, if anything, we are only more excited to see the next video! If you want a small taste of what to expect during the recap, check out some of these quotes below that almost had me spitting water out of my mouth.

” A long time ago in a Galaxy far far away there was a Master and a Padawan… let’s just say it doesn’t go well but thank goodness for Master Qui Gon and young hot Obi-Wan, soon to be mid-life, but still hot Obi-Wan, in Disney+’s limited series spin off.”

Actor Ewan McGregor recently confirmed that the single-season series will begin shooting in March 2021. In the Star Wars timeline, the show is set to take place eight years after Episode III – Revenge of the Sith, which makes it eleven years before Episode IV – A New Hope. Gad should be getting to Episode IV — and Luke, Leia, and Han’s first appearances — in his next Star Wars recap.

“Padme, who has her own Malania Trump style body double who will one day escape the back woods… and explore the wide oceans with Jack Sparrow.”

This quip, of course, is in reference to the fact that Pirates of the Caribbean star Keira Knightley quite literally forgot who she portrayed in the Star Wars prequels.

“Our heroes unite with a walking Happy Meal named Jar Jar Binks who teaches them that syntax is only a suggestion.”

We can only assume that Josh was throwing it back to these fast food toys (now conveniently available on eBay) that featured squishy Star Wars prequel characters, including the Gungan everyone loves to hate.

“Amidala has a provocative and unnecessary costume change.”

“He will be glued back together and have his revenge over numerous animated series spin-offs.”

This Darth Maul reference is hilariously accurate, as Maul — these days known only as Maul a la Cher — has already appeared in Star Wars: The Clone Wars and Star Wars Rebels. There are also reportedly plans for multiple live-action Disney+ series featuring Ray Park reprising his role as the Crimson Dawn organizer.

Other gems from the prequel recap include:

Anakin is the product of a, “working class woman and her one night stand with floating dust particles.”

C-3PO: “The Forrest Gump of the Droid Community.”

“Our 2 marquee stars battle with Darth Maul as a children’s choir sings behind them.”

“Because if there is 1 thing that’s harder to kill than an assassin, it’s Anakin’s libido.”

“cloning fan-favorite Boba Fett’s father over and over again.”

(The “fan favorite” bounty hunter first appeared in the 1978 ‘Star Wars’ holiday special. No word on if he’s set to show-up in this year’s streaming LEGO reboot.)

“Where we learn, even in war time, a little bow-chicka-wow-wow never hurts!”

“Jedi Mace Windu overcomes 2 movies with minimal dialogue and finally puts his screen presence to use.”

“Anakin, whose life could have been so different with one day a week of counseling, falls into lava.”

“And while others in the galaxy would immediately die from the same fate, Anakin is met with a state of the art facility, and given access to therapeutics, respirators, and his very own bad a** ventilator, proving that when you elect the wrong people health care is not a right, it’s a privilege.

“Yoda goes to Dagobah, where he will become a puppet”

“Obi goes into exile, where he will wait for the cameras to start rolling for his new Disney+ spinoff.”

10,000 people retweeted my message to #VOTE and in return I vowed to recap the Star Wars Franchise as Olaf. Here is Part 1: The Prequels! Thank you all for watching and more importantly for VOTING!!!!

Gad’s use of contemporary references and ease of poking fun at these characters in such smart metaphors and comparisons while sounding like Olaf is a comedy in itself, never mind the fact that this is possibly the best Disney+ promo that has ever existed. Like the Avengers Endgame recap, Josh plugs the Disney streaming service like clockwork, not only reminding us that it’s coming, but also nudging at the fact that Disney will capitalize on anything.

Hitting his new milestone, Josh has recapped Star Wars: A New Hope as Olaf and it is just as hilarious. If you want to keep laughing, give this a listen.

You keep sharing the message to #VOTE and I will keep giving you these recaps!!!

Did you think Josh Gad’s re-cap of Star Wars was hilarious?