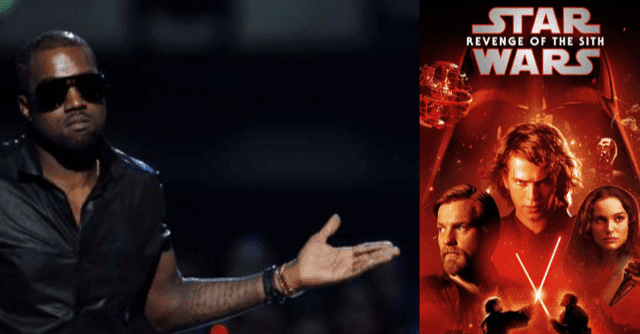 Rapper Kanye West has been in quarantine like most of the world during the global pandemic. While isolating, he’s managed to have seen Star Wars: Revenge of the Sith almost a dozen times. Now, he has an opinion on the Star Wars prequels and he would like the world to know.

(Disclaimer: This video does contain language that could be inappropriate for younger viewers)

The most important thing Mr. West said today in his interview with Joe Rogan: pic.twitter.com/DnA1jGLGC0

He went into detail explaining his reasoning for feeling this way and evening quoting one of the Star Wars prequels. West had this to say:

“This about to make me mad right here. The first time you’ve seen me get mad in an interview. They said George Lucas’ prequels were worse than the corporate-made Disney ‘Star Wars’. Like ‘Revenge of the Sith’? We saw how Darth Vader was made. Like, I watched that then times during COVID. ‘Don’t jump Anakin, I’ve got the high ground!’. I’m saying the prequels are better than anything, and I’m sorry Disney/Star Wars design team, no man, this is George. This is his baby. That thing was set in his heart to show us as children to show us The Hero’s Journey.”

The Star Wars debate between the original versus the new trilogy is something that doesn’t look like it will lay down any time soon. Although, it seems as though a lot of Star Wars fans would disagree with what Kanye West is saying.

Do you prefer the prequels to the new trilogies like Kanye West? Let us know in the comments!