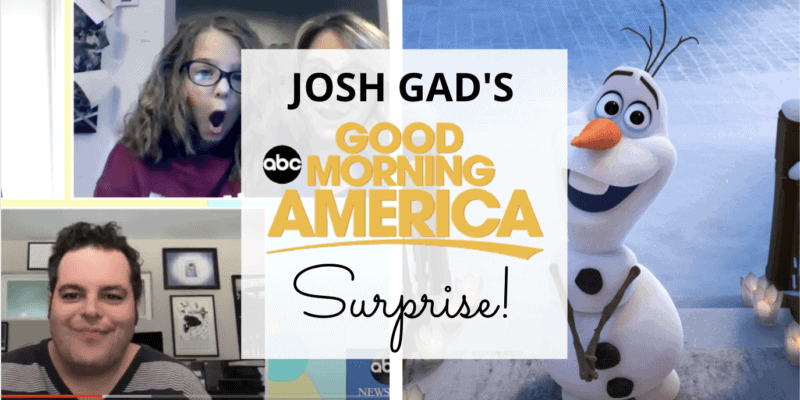 Josh Gad has been a busy man lately. The voice behind Frozen‘s Olaf read children’s stories on his Twitter account at the beginning of the global health crisis, appeared on both Disney Family Singalong specials on ABC, and recorded multiple Olaf shorts (plus a brand new song!).

Now, Gad has taken on another worthy cause. This morning, the Disney voice actor surprised a healthcare worker’s daughter on Good Morning America.

Watch the full video below:

GMA has been honoring healthcare heroes throughout the United States recently, and today’s deserving family is no exception. The mother, Ashley, who helped to found Pittsburgh’s first COVID testing unit, has not had a day off since the crisis began in February. This has been immensely difficult on her 7-year-old daughter.

As Good Morning America‘s T.J. Holmes stated, “It’s good that we know Olaf!” In the full video, Gad, who appeared remotely from home, shows off some Olaf collectibles and generally thrills the Frozen-obsessed little girl he surprised.

Gad isn’t the only member of the Disney family who has been honoring health heroes across the world recently. On World Health Day, the Walt Disney Company made sure all six of the globe’s Disney theme parks expressed their gratitude.

The Star Wars franchise has also shown their heartfelt thanks to health workers on the front lines with this video featuring Mark Hamill (Luke Skywalker) honoring Star Wars fans who work in the healthcare field.

What do you think about today’s adorable GMA segment? We love that Josh Gad surprised one of Olaf’s biggest fans!