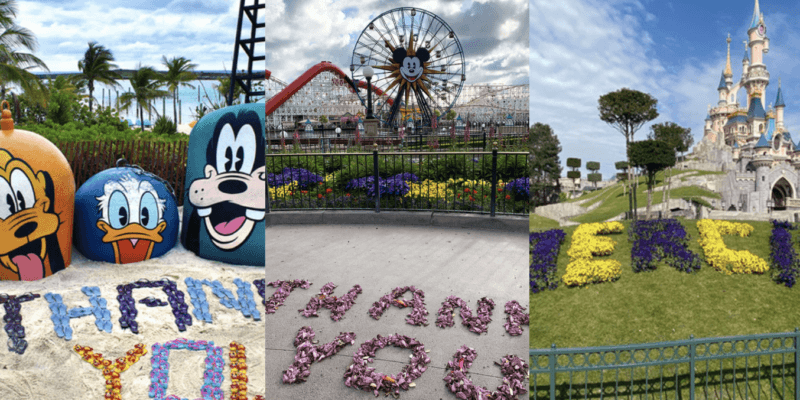 Today, April 7, marks World Health Day. This global event celebrates the hard work put forth by doctors, nurses, and other healthcare professionals who sacrifice so much to keep us all healthy year-round.

This year, though, amid the pandemic that is currently sweeping the globe, it is important to give extra acknowledgement to all that healthcare workers are doing to prevent the spread of the coronavirus worldwide.

The Disney Parks team has dedicated today’s #DisneyMagicMoment to celebrating and thanking the health professionals who are on the front lines of COVID-19 right now. Disney World Health Day acknowledgements span the globe, starting with the Storybook Castle at Shanghai Disneyland.

The largest Disney castle has been lit up with “Thank you!” in numerous languages to pay tribute to healthcare workers in every country.

Hong Kong Disneyland Disney Ambassador Melody shared a special message on behalf of all of the Chinese Disney Park’s Cast Members. Her poster reads “Magic Starts With You” and thanks healthcare workers for all they do, especially during these difficult times.

We especially love the gorgeous Japanese cherry blossoms blooming at the entrance of Japan’s Disney park!

At Disneyland Paris, Cast Members used flowers to spell out “Merci!” (complete with a Mickey Mouse silhouette) in front of Sleeping Beauty Castle.

The Disney Parks icon has been lit blue to serve as a beacon of hope as global health concerns continue to mount.

On the West Coast of the United States, Disneyland Resort Cast Members wrote both “Thank you!” and “Gracias!” in flowers in front of Pixar Pier at Disney’s California Adventure park.

This was a heartfelt nod to the large Spanish-speaking population in California, many of whom work in healthcare settings in some capacity.

Even though Disney Stores are currently closed temporarily, the team’s gratitude for healthcare workers and first responders is immense.

Finally, the Walt Disney Imagineering team got in on World Health Day with a sweet “Thank you!” to all of the medical workers who are currently innovating new ways to save patients each and every day.

All of us at Inside the Magic would like to issue our own World Health Day “Thank you!” to everyone working on the front lines in hospitals, clinics, and doctor’s offices around the world. We appreciate you.

To share your own World Health Day appreciation message alongside Disney theme parks, use the hashtag #ThanksHealthHeroes on social media.