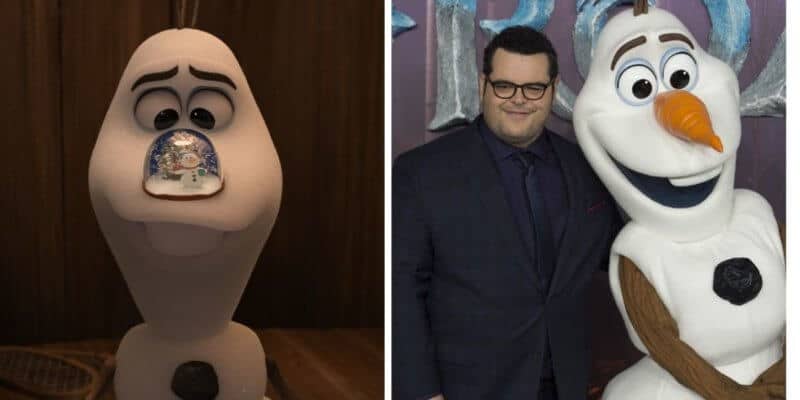 I think it’s safe to say, we all love Josh Gad — The incredible actor who brought Olaf to life, time and time again, ever since the first Frozen film made its debut (and even when he’s not voicing the lovable snowman, the second Gad talks, we are instantly met with a warm hug).

So what is it like working with Gad? Well, during a press conference (in which Inside the Magic attended) for the upcoming Disney+ short, Once Upon A Snowman, which debuts on the streaming service on October 23, the Frozen filmmakers gave some inside information and shared fun stories about working with Gad.

Josh Gad is known for his humor, his warm heart, and of course, his improv. So, when the filmmakers were asked if Gad improvised any lines for the upcoming short, Director and Writer Trent Correy, explained that himself, Jennifer Lee and Dan Abraham all put their heads together for the script, but Josh Gad is just as funny in person as he is on social media and in-person and so of course, he had to put his own spin on things.

“He is hilarious,” Correy said during the press conference. “In fact, Dan and I were in the recording booth with him, not behind glass. And I think the hardest part about that was just trying not to laugh so we didn’t mess up the take. I was covering my mouth most of the time, just spitting while Josh just having a blast. But he is so generous with his time. He came in right after Frozen 2 to record this with us. He gives you so much as an actor and a comedian. I just love working with him.”

“And Josh was the one that turned it into the, ‘I kind of look like a Fernando or a Trevor’. Like he was sort of searching a little bit more. And leave it to Josh to come up with the most random, funny name that would not really fit Olaf. I don’t know if he’s a Fernando or not,” she concluded.

Correy elaborated by saying, “Yeah. And of course, when you get Olaf and Josh Gad together, all the little improvisations of laughing, giggling, screaming, just he makes the script come to life. He makes the short come to life.”

He went on to explain how every time they work with Gad, there is never a dull moment. The creators and animators adore working with Gad. There was one story that stood out to Correy that he told, which had everyone laughing. “Josh came in excited, he brought his family and his little kids, which was adorable,” he explained. “And this cracked me up. I still think about it all the time. His little daughter came up to me. I’m not sure how old she is, but she came up to me and she kind of shakes my hand and she says, ‘ I didn’t like the short… I loved the short.’ And I was like, ‘She is Josh Gad’s daughter.’ The timing was perfect that even I fell for a three-year-old’s joke.”

Bouncing off of what Del Vecho said, Correy chimed in with “Peter, it’s a really good point that, Josh, he comes and talks to the animation crew throughout the production of Frozen, Frozen 2, and Once Upon a Snowman. The animators love him. He will just talk endlessly to the point where we’re like, “Okay, Josh, we got to work. Maybe it’s time to go.”

Overall, it was a joy to hear the Frozen animators and creators talk about working with Josh Gad. We know Gad is, and always will be, part of the Disney family.

Once Upon a Snowman will be available to stream on Disney+ on October 23. If you are not yet signed up for the streaming service, you can get started here.

Comments Off on Filmmakers Reflect on Working With Josh Gad