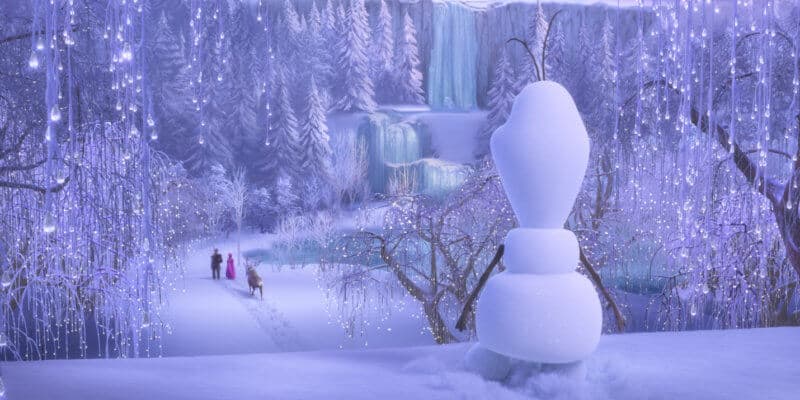 Olaf — the adorable, innocent, outgoing, lovable snowman that we instantly fell in love with back in 2013 when Disney debuted the blockbuster animated film Frozen.

But how did Olaf come to be? Where did he go when Elsa finished building her ice palace? Where was Olaf when the pack of wolves chased Kristoff and Anna in the first Frozen film? And, the question we are all asking ourselves, why does Olaf love summer so much?

Well, to get our answers, let’s go back to the beginning. In the first Frozen movie we know Elsa first brought Olaf to life as she belted out her anthem, “Let It Go,” but what happened within the minutes after? Once Elsa creates Olaf with her with powers, she immediately continues up the North Mountain to build her incredible ice palace. So, what happens to Olaf? Where did he go? How did he become the adorable and innocent snowman we fell in love with? Well, in the newest Disney+ original short, Once Upon a Snowman, we finally get our answers!

Once Upon a Snowman follows the origin story of how Olaf came to be. He is first created during “Let it Go” but then Elsa immediately walks away from him. In the Disney+ short, instead of following Elsa up to her ice palace, we follow Olaf.

The audience gets to see the adorable, optimistic snowman within his first seconds of being alive, which, as you can imagine, he is pretty ecstatic about. Except, once Olaf’s first rush of being alive is over, there’s one issue — Olaf realizes that he has no idea who exactly he is (yet).

He has no guidance, no one to follow, no history, and no story. In Olaf’s words, he was having “a bit of a crisis of identity.” As he explores the surrounding areas, trying to figure out who he is and where he belongs, the audience will soon see some very familiar locations — including Wandering Oaken’s! Fans of the Frozen franchise will instantly be brought back to the first Frozen film as Olaf just barely crosses paths with some of our favorite characters.

The Disney+ original short is very entertaining and for all of you Frozen fans out there, you will not be disappointed. It is everything you imagine it could be plus so much more. But, for those of you who want to look past the initial fun, lighthearted, and entertaining storyline — there is something much deeper here that I think you all can appreciate.

As we mentioned earlier, Once Upon a Snowman follows Olaf as he struggles to find his own identity and place in the world, which, honestly, I think a lot of us can relate too. We are all here to go on different paths, with not much guidance, as we struggle to find what we are “destined” to do in life. And that is exactly what Olaf struggles with in this Disney+ short as he tries to figure out what he is, who he is, and of course, where his nose is.

The official description of Once Upon a Snowman reads:

The previously untold origins of Olaf, the innocent and insightful, summer-loving snowman who melted hearts in the Academy Award®-winning 2013 Disney animated feature, Frozen, and its acclaimed 2019 sequel, are revealed in the all-new Walt Disney Animation Studios animated short, Once Upon a Snowman. The film follows Olaf’s first steps as he comes to life and searches for his identity in the snowy mountains outside Arendelle. Once Upon a Snowman is directed by Trent Correy (animation supervisor, “Olaf” in Frozen 2) and Dan Abraham (veteran story artist who boarded Olaf’s “When I Am Older” musical sequence in Frozen 2) and will debut exclusively on Disney+ October 23, 2020.

Once Upon a Snowman debuts on Disney+ on October 23. If you are not yet signed up for the streaming service, you can get started here.

Comments Off on What is Olaf’s Backstory? Disney is Finally Revealing It!