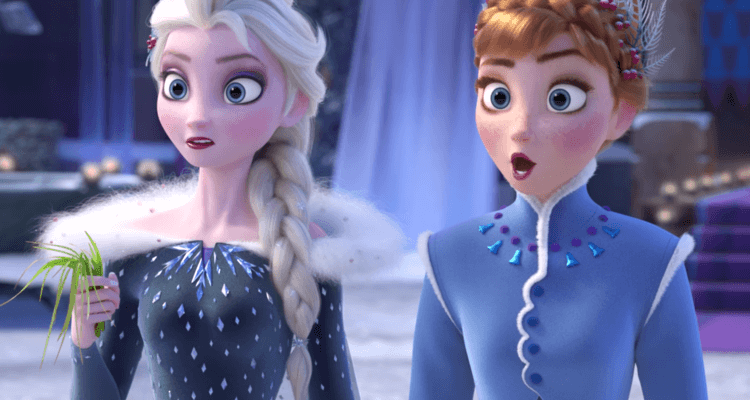 Now five days into its theatrical run, Frozen 2 has given us a lot of questions at Arendelle’s beloved Royal Family. One of the questions it answers is “Where were Anna and Elsa’s parents sailing to?” Turns out, they were sailing nowhere near Africa.

Other than the basic answer to the voyage itinerary, I will refrain from all other spoilers. I promise!

After the release of the first Frozen film back in 2013, the internet became hooked on the fan theory that the new Queen and Princess of Arendelle were the long lost sisters of Tarzan. The movie showed the King Agnarr and Queen Iduna of Arendelle supposedly perishing in a storm while at sea. Well, Tarzan begins with a shipwreck that forces him, and his mom and dad to take shelter in a treehouse in the African Rainforest.

Despite a few stylistic differences, fans saw the resemblance between Tarzan’s parents and Anna and Elsa’s parents Angarr and Iduna to be uncanny. Many thought, “What if they’re the same people?”

There are various versions of the theory. One of them was that King Agnarr and Queen Iduna were on their way to Rapunzel’s Coronation in Germany when they were taken so far off course they found themselves shipwrecked off the coast of sub-Saharan Africa. Queen Iduna was secretly or unknowingly pregnant at the time, and Tarzan was born on the ship.

Related: It’s official: Kristoff is the best Disney prince thanks to “Frozen 2”

How the theory is debunked:

In Frozen 2, we learn that King Agnarr and Queen Iduna set sail into the Dark Sea. Their mission: to discover the source of Elsa’s powers and a way to help her control them. And for those who don’t have Google Maps, the Dark Sea is nowhere near Africa.

On top of this, Tarzan’s parents by the book are named Sir John Clayton and Lady Alice Clayton and are English nobility. Not Nordic Royalty. So, if Disney canon is not enough to debunk this theory, Tarzan canon does it too.

There is still hope for other Disney movie connections.

Before the Marvel Cinematic Universe and the Disney-Owned Star Wars Universe, there was the Disney Movie Universe. At least, to the Disney fans. Disney Parks around the world offer Disniacs the chance to see all their favorite characters in this shared reality, and it flows so perfectly. We want that reality to be true in the movies.

Disney has already hinted at a shared universe before. Rapunzel and Flynn among others are seen at Queen Elsa’s Coronation Day, and outside of Frozen, there are cameos and references all across the new Mickey Mouse Cartoons.

Regardless, Frozen 2 is still receiving rave reviews and the franchise is bound to continue its success as a Disney Animation Cult Classic.

Did you buy into the Frozen/Tarzan theory? How else do you think the Frozen franchise could be connected to other Disney movies? Let us know in the comments!