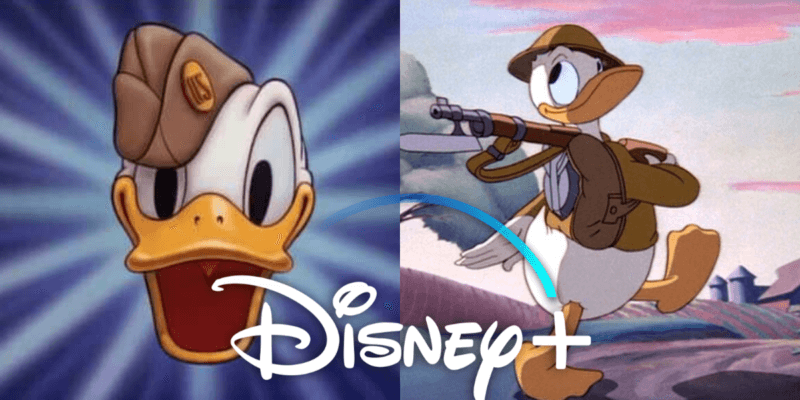 Today is Memorial Day for Americans, a time to reflect and remember all of the brave men and women who have fought in the defense of America and freedom all over the world. And there are a few members of the Disney family who served. Walt Disney himself served in the Red Cross and his older brother Roy was in the Navy during World War 1, and Donald Duck served in the army during World War 2.

Yes, as a way to help gather support for the war effort, Walt Disney Studios made several cartoons depicting Donald Duck as a citizen ready to put his life on the line to defend his country. Getting drafted himself, it is in these cartoon shorts that we learn his middle name is Fauntleroy, and that he has dreams of being a pilot. But like most fighting men of the day, Donald’s dreams were not granted. Instead of getting to fly, he was assigned to the infantry (and, of course, Pete was his drill Seargent).

But Donald Duck would go on to prove himself as a soldier. After merciless training under Drill Seargent Pete, Donald was given a commando mission in the Pacific theater and came through with flying colors.

But none of these shorts are yet available on Disney+, and there is a good chance some never will be because of the family-friendly standards being set by Disney Chairman Bob Iger. So here are two shorts that have a chance of making their way to Disney+ and two others that arguably have no chance at all.

We’ve attached videos of the full cartoon short so our readers can decide for themselves.

Related: Parents are Refusing to Show These 10 Disney Movies to Their Kids

Released in 1942, “Donald Gets Drafted” tells that exact story and in many ways reflects the mentality of the naive at the time. Donald is swept up in the romanticism of Army recruitment campaigns and has a dream of being a pilot in the Army’s Air Corps. But his requests are all but ignored and he is sent to the infantry until Drill Seargent Pete. Beyond the inclusion of guns, there is very little taboo about this cartoon and–if anything–it keeps with Disney’s adage: “Who gets stuck with all the bad luck? No one but Donald Duck.”

“Fall Out Fall In”

Released in 1943, we join Donald Duck on a march with his platoon. As expected, he’s falling behind and having issues with his gear. As they get further and further from camp, the conditions range from rain and snow to blistering heat. Disney intends for the entire short to poke fun at Donald Duck as he struggles through another seemingly mindless task while getting people’s mind on the army and joining up.

Released in 1944, after two years of training, we finally get to see Donald Duck in action as he is assigned a commando mission deep in the Pacific theater. His mission: to take out an entire Japanese airbase alone. But like most war-time films of the day, the depiction of the enemy–the Japanese army–is extremely offensive from the way they are drawn and their voices to the line “Japanese custom say: always shooting the man in the back please.” Ironically, this is one of Donald Duck’s biggest wins, causing a flood and literally washing out the enemy base.

We present to you the cartoon that won the 1943 Academy Award for Best Animated Short. No, we’re not kidding. Originally titled “Donald Duck in Nazi Land” but changed to “Der Fuhrer’s Face” to match the satirical hit song written by Disney songwriter Oliver Wallace, the short follows America’s favorite Duck as he endures a nightmare where he is forced to live in a land where the Axis Powers of Nazi Germany, Fascist Italy, and Imperial Japan reign supreme.

The short is intended to be both funny and horrific. While the animators once again depicting the enemy in a very offensive light, one would be more disturbed by seeing Donald Duck be forced to say “Heil Hitler” over and over again.

But all’s well in the end. Donald wakes up wearing American flag pajamas, hugs his miniature Statue of Liberty, and says “Am I glad to be a citizen of the United States of America.” This short is not for the faint of heart and comes with a much-warranted introduction by Disney historian Leonard Maltin.

We at Inside the Magic want to make it clear that we do not condone any of the offensive decisions made in the execution of these shorts. Rather, we share them in their entirety so you, our readers can witness pieces of Disney history and decide for yourselves.

Related: OpEd: Has Disney Taken Censorship Too Far With the Latest Disney+ Blur?

So, do you think these of any of Disney’s WW2 shorts should be available on Disney+? Let us know in the comments!