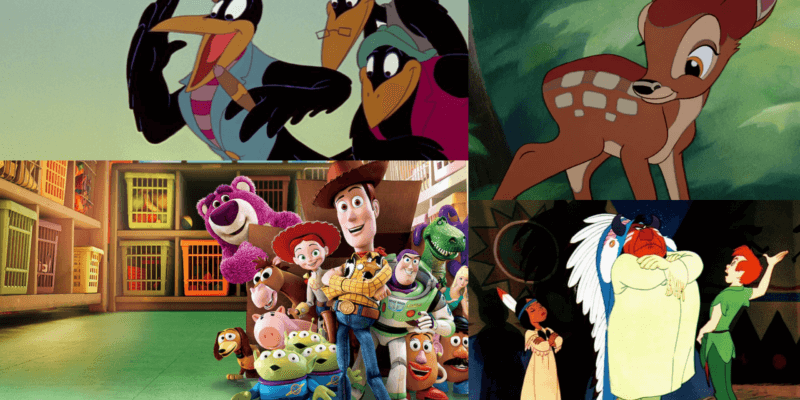 We read a lot of information on a daily basis that suggests parents aren’t showing certain films to their children. Most don’t come as a surprise to us (films like Song of the South often appear on the list). But a survey conducted by OnBuy.com had a few interesting choices that we thought we would try and unpack.

To kick things off, here is the list of 10 Disney films that parents reportedly won’t often show their children, from least problematic to most problematic:

Now, we don’t know about you but…TOY STORY 3?

Okay, let’s start with a few that might make a bit of sense. Dumbo and Peter Pan both include some pretty questionable scenes. The crows in Dumbo just don’t sit right in 2020, and Peter Pan has the poor treatment of Native Americans and the odd line from Peter —  “girls talk too much.”

The outdated cultural depictions are certainly present in a few of these movies and questions should be asked pertaining to racial stereotypes. The odd crude joke though? It never did anyone harm so long as there’s the right context.

Fantasia and Disney classic Snow White also have some pretty terrifying scenes, and to this day I will personally admit to being a little bit frightened by a couple of scenes in Fantasia. Other movies like Bambi tackle death in a big way, but it’s about being there to explain what is happening to your child.

There is, of course, an argument to say that there’s a least a single scene in each of these movies that’s inappropriate for children of a certain age. But then there’s also a little thing called context. It’s all about how you explain things to your children.

On a personal level, I watched the likes of Dumbo and Peter Pan a lot when I was a kid and have respect and love for every type of human being on the planet thanks to my parents. I am also about to welcome my first child into the world and will have no issue with her watching any of the films on the list when she’s growing up.

It isn’t about the film, it’s about the context and understanding the culture and time the movie was released.

Related: Is Disney Plus taking censorship too far?

It seems that most parents in the poll agreed with this approach with 62% of them saying they didn’t have any issues with their kids watching these films.

What do you think, is there a Disney film on this list you wouldn’t allow your children to watch? Let us know in the comments below!