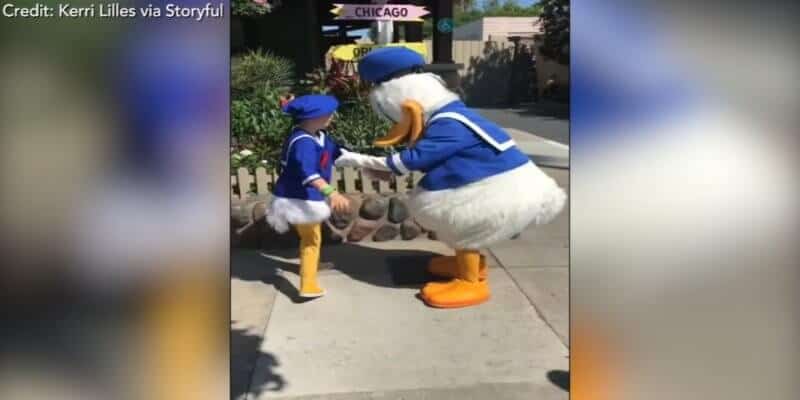 Walt Disney World is the Most Magical Place on Earth for everyone who visits, including possibly the biggest Donald Duck fan around. A little boy with Down Syndrome recently had the most adorable character interaction on his family Disney trip, and the video is enough to bring a smile to everyone’s face.

AAsher Liles, a young boy with Down Syndrome and non-verbal apraxia, had the opportunity to meet his favorite Disney character, Donald Duck, while visiting Disney’s Hollywood Studios on a trip to Walt Disney World. In the video below, you can see Liles dressed up head-to-toe in a Donald Duck costume, as well as his reaction to interacting and playing with Donald Duck himself. Donald Duck spun around when he saw the child, giving him a great big hug and leading him toward the PhotoPass area so they could get some pictures of their special moment. The two quickly became friends and used non-verbal communication to interact with each others’ costumes, even shaking a tail feather at the camera.

Take a look at the video of Liles’s interaction with Donald Duck, as recorded by his family:

Liles wore his cute Donald Duck costume throughout the Walt Disney World theme parks, and he even got the chance to take some other photos with Donald Duck and Daisy, too. Take a look at some photos Liles’s mother, Kerri, shared on Instagram documenting her son’s character interactions on their vacation:

This adorable video is proof that Walt Disney World Cast Members always strive to create magical and memorable moments for every guest, including Liles and other children with special needs. Any Disney fan can relate to that special feeling we get when we have an incredible interaction with a Disney Cast Member. By the looks of Liles in the video and photos of his experience with our two favorite Disney ducks, he made memories on his Walt Disney World trip that he and his family will cherish for years to come.