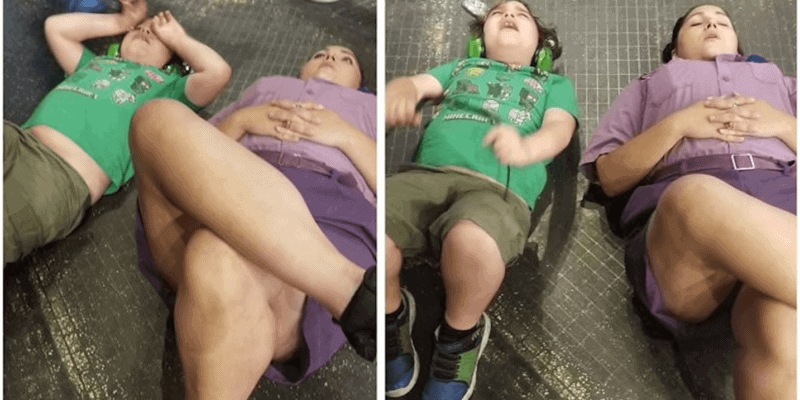 An autistic boy suffered an “autistic meltdown” after the Spider-Man attraction broke down at Universal’s Islands of Adventure and in a heartwarming tale, a Universal employee laid down on the ground next to the boy to help calm him.

The images of the Universal Orlando employee and the boy, which have now gained some steam on Facebook, show the situation as it occurred in the theme park. The images were originally posted by the boy’s mother, Lenore Koppelman, who explained the inspiring tale in her Facebook post.

“Ralph is awesomely autistic, and we are proud to be a neurodiverse family,” reads a post alongside the photos. “As wonderful, loving, intelligent and incredible as Ralph is, sometimes he struggles.

Koppelman explained that when her son struggles he can have an “autistic meltdown,” which occurred after her young son spent the entire day looking forward to riding The Amazing Adventures of Spider-Man at the park only to be turned away after the attraction broke down.

“When we finally got back to Spiderman, he was leaping for joy. He thought “OH WOW! This is IT! FINALLY!” and you should have seen the SMILE on his face. It was incredible. Then when it was almost our turn to board, and he could see the end in sight, the vehicles right in front of us, we got the news that the ride had broken down. Everyone was very nicely asked to exit. And Ralph, understandably, lost it,” reads the post.

This was when Ralph fell to the floor while a crowd of people exiting the ride walked around him. However, this was when a generously kind Universal employee came to the rescue.

“He began sobbing, screaming, rocking, hyperventilating, and truly struggling to breathe. A woman who worked there named Jen came over… no… no, she rushed over… and while I frantically kept trying to get him to stand up so he wouldn’t get trampled on by people, she encouraged me to leave him on the floor if that is where he needed to be,” the post read.

“Then she did this. She got down on the floor with him. She rested next to him while he cried his heart out, and she helped him breathe again. She spoke to him so calmly, and while he screamed and sobbed, she gently kept encouraging him to let it all out. She told people to keep on walking around them, so they would stop standing there and staring. And then she told him it was okay for him to be sad and feel this way. She understood. She would feel the same way too. His feelings were validated. And she told him he could lay there with her as long as he needed to until he felt better. ”

Shortly after, Ralph did begin to calm down and the family was moved by the employee’s willingness to help their son.

“The entire family left the store and marched straight over to customer relations without a single pit-stop, to sing Jen’s praises. I showed the sweet woman working there the photos of Jen with Ralph, and she got misty-eyed herself and hugged me. We showed each other our goosebumps on our arms and laughed and hugged yet again. And she ALSO told me how much training they get when it comes to helping people with various special needs,” reads the post.

Ralph ended up not getting to ride the Spider-Man attraction after all. Although, Lenore says: “We will save up for another trip to Universal, either in Florida or LA, and we will go to the Spider-Man ride FIRST. They DEFINITELY have a repeat customer in us,” reads the post.