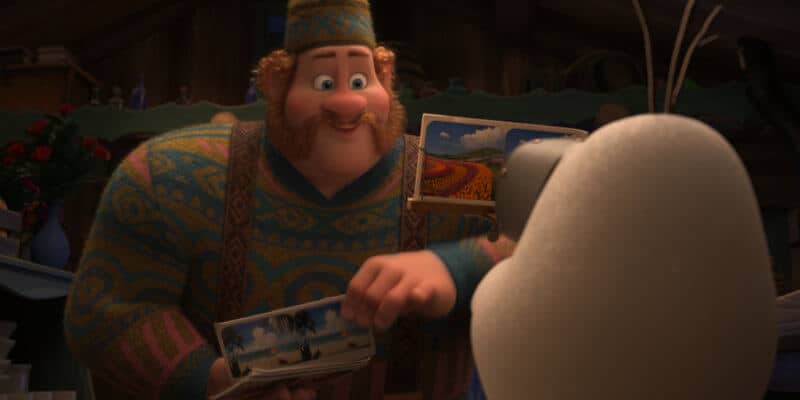 Calling all Frozen fans — the newest Disney+ short is going to blow you away!

Once Upon a Snowman follows the origin story of how Olaf came to be. He is first created during “Let it Go” but then Elsa immediately walks away from him. In the Disney+ short, instead of following Elsa up to her ice palace, we follow Olaf. As he explores some of the nearby locations, viewers will soon see some very familiar locations — including Wandering Oaken’s Trading Post! Fans of the Frozen franchise will instantly be brought back to the first Frozen film as Olaf just barely crosses paths with some of our favorite characters.

So what are some of the fun Easter Eggs that viewers should look out for when watching the Disney+ short? Well, during a press conference we attended for Once Upon A Snowman, the Frozen filmmakers gave some inside information and shared some fun Easter Eggs to keep those eyes peeled for!

When asked if there are any Easter Eggs incorporated into Once Upon A Snowman, Director and Writer Trent Correy explained, “Oh, well, there’s a lot of little fun tidbits throughout the short, because we’re showing it from a different perspective, obviously.”

He then went on to tell his favorite: “One of the ones I love is Oaken selling Anna’s coronation dress.

Head of Animation Becky Breese followed up by saying something that I think we all were thinking: “I want to buy Anna’s coronation dress.”

Correy then replied with, “It’s for sale. I don’t know if you can…It’s pricey, Becky, it’s pricey. I just, I love that idea that, in the movie, you see Anna walkout in her new winter clothing to go up the North Mountain, and we get to show what happened to that dress and that Oaken made a small profit.”

Creative Consultant Peter Del Vecho then went on to explain his favorite Easter Egg saying, “There’s other little Easter eggs within the cards that he looks at, Olaf, looks at in the stereoscope. There’s a few different shots in there that people might be keen on from other films in that.”

When asked to elaborate on which shots viewers may see, Del Vecho said “We might see a Moana film, and a shot in there. You might see a little Moana.”

But that’s not all because Del Vecho also said there might be a bit of Tangled included as well — I guess we will just have to keep our eyes peeled! If so, this wouldn’t be the first time Arendelle and Corona crossed paths, as in the first Frozen film, viewers can see Rapunzel and Flynn for just a split second as they visit Anna and Elsa on Coronation Day.

Once Upon a Snowman will be available to stream on Disney+ on October 23. If you are not yet signed up for the streaming service, you can get started here.