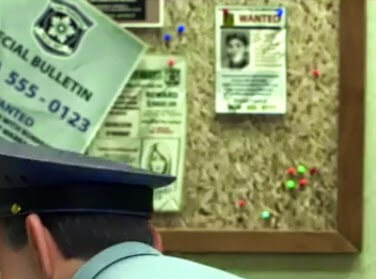 When “Big Hero 6” comes home on Blu-ray and digital download next month, it will feature a new bonus feature highlighting the hidden “Frozen” extras scattered throughout the film, including a few new ones no one has spotted yet.

Widely known are two appearances of Hans in the movie, one as a poster in the police station when Hiro and Baymax are trying to get help and the other a statue that gets hit by Baymax’s rocket arm. But as Baymax is flying through San Fransokyo, a couple more “Frozen” references are hidden for those with quick eyes, as shown below.

A statue of Olaf stands on the San Fransokyo streets. And in San Fransokyo’s harbor, the ship from Arendelle can be seen. These and more Disney Animation Easter Eggs will be revealed when “Big Hero 6” is released on Blu-ray on February 24 and even earlier on Disney Movies Anywhere on February 3. Comments Off on Olaf among new hidden “Frozen” Easter Eggs revealed in “Big Hero 6” Blu-ray bonus feature, due out 2/24