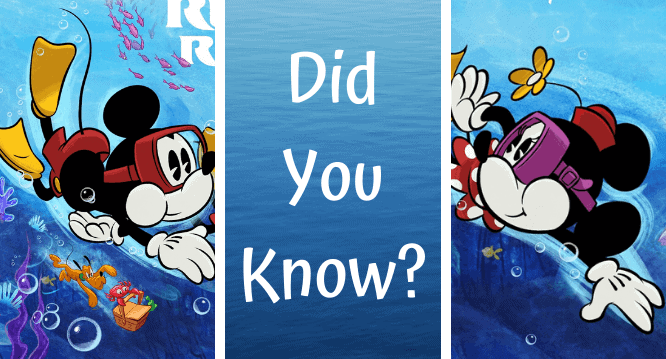 Ready your FastPass+! You’ll want to ride Mickey’s first ride-through attraction over and over in order to find all of these Mickey & Minnie’s Runaway Railway fun facts! The easter eggs and treasures within the ride were carefully placed by Imagineers as homages and nods to previous attractions as well as Mickey’s history. Read up and see how many you can find on your next trip to Walt Disney World Resort!

Among Mickey and Minnie’s Runaway Railway fun facts are the ride features several sound effects originally created by Disney Legend Jimmy Macdonald. The Disney Parks blog relays to us, “Jimmy had founded the sound effects department in 1934, and was regarded as a one-man sound effects wizard. Over his 48-year career with Disney, he created and assembled one of the largest and most impressive sound effects libraries in motion picture history—and a collection of one-of-a-kind hand-made gadgets created specifically for unique audio applications.”

MacDonald’s own equipment creations were rescued from storage (and nearly the trash) as Imagineers Joe Herrington, Mark Rhodes and Kevin Rafferty scooped them up after MacDonald’s retirement. Hauling the collection over to WDI, the instruments and devices were refurbished.  Years and years later, as Mickey and Minnie’s Runaway Railway was being designed and created, Kevin Rafferty remembered MacDonald’s contributions and made sure to incorporate these treasures as MacDonald designed them.

A little known fact, Jimmy MacDonald also took over Mickey’s voice for Walt in 1946 during re-recording sessions of Mickey and the Beanstalk, as well as for film, TV, records, in the Parks and Ice and Arena Shows from that time until the mid-1970s. During the debut of Mickey Mouse Club in 1955, Jimmy ceded Mickey back to Walt and took over the voice-over introductions.

Having been the voice of Minnie Mouse since 1986, Russi Taylor leads an envious life among voice actors. Her illustrious career includes playing well-known characters like Huey, Dewey and Louie, Pebbles Flintstone, Baby Gonzo and a variety of characters on The Simpsons. Inside the Magic reflected in 2019 over the loss of Russi Taylor, who was, indeed, a Disney Legend. She gave her voice to our beloved Minnie Mouse before passing at the age of 75 on July 26, 2019, in Glendale, CA.

Upon her death, Variety commented, “Minnie Mouse lost her voice with the passing of Russi Taylor. For more than 30 years, Minnie and Russi worked together to entertain millions around the world—a partnership that made Minnie a global icon and Russi a Disney Legend beloved by fans everywhere,” said Disney chairman and CEO Bob Iger. “We’re so grateful for Russi’s talent as well as the tremendous spirit and great joy she brought to everything she did. It was s a privilege to have known her and an honor to have worked with her, and we take comfort in the knowledge that her work will continue to entertain and inspire for generations to come. Russi will be sorely missed and our hearts go out to her family and friends, along with our deepest condolences.”