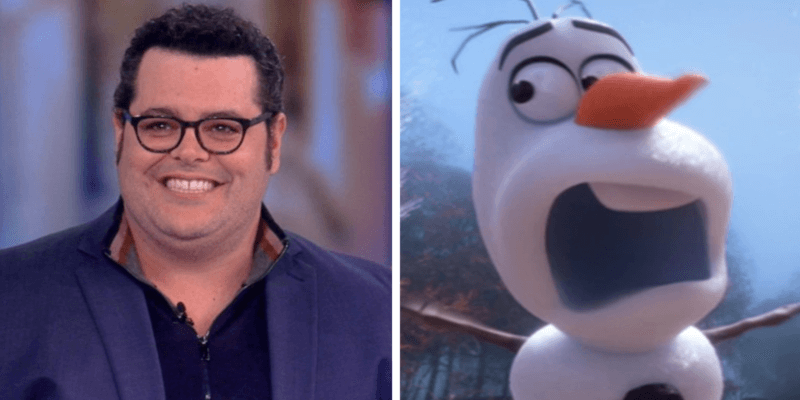 Josh Gad, who voices Olaf the snowman in the Frozen franchise, has opened up about feeling nervous while filming the upcoming six-part Frozen docuseries, Into the Unknown: Making Frozen 2.

The documentary gives Disney fans an all-access look at the making of the blockbuster animated sequel, which follows Anna, Elsa, Olaf, Kristoff, and Sven’s adventures three years after the events of the first film (though Frozen 2 came out six years after the original 2013 Frozen film released). Camera crews were allowed to shoot any behind-the-scenes footage they wanted of the voice acting cast, including Gad, Idina Menzel (Elsa), and Kristin Bell (Anna).

Gad said, “I’m not going to lie, I was so intimidated with the cameras around because you feel so vulnerable.”

The comic actor continued, discussing how he had to do multiple takes of Olaf’s song “When I Am Older”: “I had to come back and re-sing it. I’m not Idina. She goes up in front of 50,000 people and she goes ‘oh that was a small audience.’ I get intimidated if there are more than three people in a room while I’m singing.”

Gad also went on to talk about how he gets into character when he portrays Olaf, who has become a beloved character in the Disney fandom. He said, “My Frozen process is so intimate and when I am creating music or lines for Olaf, it’s like our brain trust needs to be this (makes together sign with his hands) or I start to feel a little naked and I can’t experiment and play.”

Fans of Frozen 2 already know how incredibly successful the follow-up movie was. It grossed $1.45 billion, making it second only to Disney’s 1994 The Lion King as the highest grossing animated film of all time.

Megan Harding, director of the Frozen sequel documentary series, said of the new Disney+ original content, “Right from the very start, there was an incredible commitment that we all wanted to make something that was very different to a traditional behind-the-scenes special.”

She continued, “These movies [animated feature films] don’t just come out fully formed, they are hard-won by many talented people and that meant that people had to be honest and brave and fearless when we came by, which everyone was.”

Into the Unknown: Making Frozen 2 will be available for streaming on Disney+ on June 26. Collider has already called the series “brilliantly candid,” so fans of Frozen characters are sure to love it.

What do you think about Josh Gad’s nerves while filming the Frozen documentary series? Are you surprised since he has such a confident persona in his animated movie appearances?

Comments Off on ‘Frozen’ Documentary Cameras Made Josh Gad Nervous